>this past weekend i took a trip down to nowata, oklahoma, to visit my mom’s side of the fam. my cousin and his wife have a 10 week old baby that needed to be introduced to the cooper family, but this post isn’t about that.

i had a borderline scary epiphany at lunch on saturday. you see, my grandpa jack – like most other grandfathers – tells a lot of stories. this is probably to do the fact that his 80th birthday is in 11 days and so he’s got 58 more years worth of stories than i do. the man is extremely smart and impresses me often with his knowledge about pretty much everything.

but at lunch on saturday i got to thinking.

he was telling a story about some keen fella he used to know who had six toes. and for just a moment i departed from my nodding and realized that his story sounded a little bogus. this thought frightened me. i don’t think i’ve ever doubted my grandpa before – i just assume he’s telling the truth and full of wisdom about everything. for the first time in my life i’d started to listen to my grandpa critically.

i continued this for the rest of my trip, and i started to wonder how many times he had told me a completely fabricated story. he could’ve been lying his whole life and i would’ve just soaked it up like it was the perfect truth. honestly, i still believe he doesn’t make anything up, but if he had decided to pull one over on me there is no way i would’ve caught it. i think thats hilarious and impresses me even more.

i’d be terrible playing mafia with him. glad we didnt play.

i dont think i’ll ever spend a weekend doubting my grandpa again. its just too unsettling. it makes you wonder if anything you’ve ever known is true.

but i know my cuz besty and baby blake are adorable: 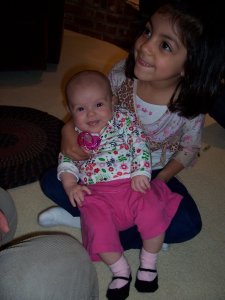