>highlight of my trip to chicago: wrigley field.

baseball in chicago is like an illness that you’re just bound to catch. i got to experience it in full force on thursday night: cubs vs rockies. it was a back-and-forth game, but ultimately errors ruined it for colorado as the cubs put up a few unearned runs to seal the victory, thus convoluting my baseball loyalty even more than had already been done.

you must know that i was raised a st. louis cardinals fan. my father’s father’s father was a fan and the fandom was passed on to me. due to the fact that I was a fetus when the royals beat the cardinals in the 1985 series, I have no understanding of the I-70 rivalry. cardinals fans dispute a bad call at first base and royals fans have nothing else to brag about and no one else to hate but the cards. i’m stuck naively in the midst of a tentative fued already.

so i’m an I-70 fan. when the kc/stl interleague series happens i’m not sure who i’m for. my heart pulls me toward kc, but my roots run deep with the cardinals.

cardinals fans,have bigger fish to fry than the guppies in kcmo. the cubs/cardinals rivalry is the only one in the majors that can even hold a candle to the yankees/red sox. and it isn’t one-sided like the cards dispute with the royals – this rivalry is decades old. these are two baseball cities. their fans are die hard and don’t go to the games for hot dog races or chunky DH replica jersey giveaways. they go for the baseball. there is no need for any special promotions or gimmicks to draw a crowd; both cities sell out their games regularly with nothing but the game. they love baseball, and i love that. kansas city doesn’t love baseball; they don’t understand and I don’t resonate with the kc baseball mindset. there is passion and energy and camaraderie in chi-town that kauffman stadium just doesn’t possess. it’s also very contagious.

so here i am rooting for the home team at wrigley field and just lapping up the excitement in the place. Everyone comes together all up and down Clark to celebrate cubs baseball. all of wrigleyville is blue and white flying huge “W” flags to celebrate a cubs win over a less than terrific rockies squad. i can’t imagine what things would be like against the cards. I’d be thoroughly shaken. the cubs have clever memorabilia, tradition, and Old Style draft. it is classic baseball at its finest. everyone is into the game – people STAND AND CHEER without the assistance of a flashy “NOISE” or bogus “FAN-O-METER” graphic. kansas city folk don’t understand baseball. they just don’t get it. it goes beyond the game. It’s the atmosphere. 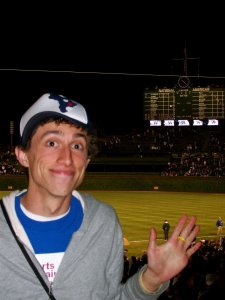 am i a cubs fan after thursday’s game? not necessarily. but i respect their fans and wish i could be apart of their environment. kauffman stadium is weaksauce. royals games typically contain 5 highlights for me: the condiment race (1) and each time john buck comes to the plate (2 through 5). but those aren’t things i’m on board with 40.000 people with – heck the condiment race even creates disagreement amongst like-minded fans – and although jb-fever is sweeping the nation and explodes for 4 at bats each game, it doesn’t make the other 23 outs in the game any more exciting*.

my loyalties are so messed up nowadays, but I’m fine with that. Hate if you want, i’m just a fan of baseball and the atmosphere it creates. and if you share my excitement for the game then i’m a fan of yours too. so here’s to you north side chicago – you do it right and I hope I can be a bigger part of that atmosphere in the years to come.

* – this is an incredibly subtle jab at the royals and jb. harsh really.