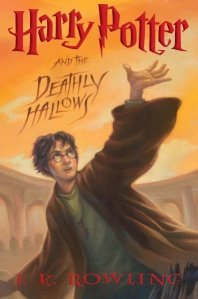 i made the mistake of starting harry potter and the deathly hallows yesterday afternoon. this was only a mistake because i finished it at 5 am. but since i don’t have class until 1 on tuesday then it wasn’t necessarily a long term problem.

i read it in 22 hours the first time. round two took a couple months. round three: 11 hours. i’m not sure if i’m considering it a waste of time or not.

as i layed down to sleep late last night with the adrenaline pumping through my system it occurred to me that i hadn’t written anything substantial in the wake of the release of HP and the DH in july of 07. i had written a fantastic pre-game entry with all my expectations, predictions and love confessions.

somehow i failed to write a post-game entry. i don’t know how, i can’t explain how i could’ve had anything more important cycling through my brain than the contents of this bulbous novel. i’ll claim that i intentionally waited as to not spoil the book for any one who hadn’t had the chance to pour through its pages yet. so here are the “more thoughts to come.”

i made a list of predictions in my pre-game: a list of things i needed to have happen in the seventh book. let’s see how if i came out on top in my predictions.

harry versus draco cage match: it didn’t come as i anticipated. i wanted a full on duel, but i suppose one could argue that it did happen anyway. to some extent at least. harry swipes draco’s wand (therefore – as far as the wand is concerned – defeating his opponent), and they did have somwhat of a row in the Room of Requirement, but not a “cage match”. however, harry also saves his rear twice during the battle of hogwarts. my wish for ron and hermione to get involved was fulfilled though, coming to a climax when ron suckerpunches him from under the invisibility cloak after saving him the second time. i was somewhat correct, but not entirely. no points awarded or deducted. Correct/Incorrect: +0

snape has to be good: thank goodness. if snape was evil i would’ve been flabbergasted. however, he definitely had quite a bit of loyalty to voldemort and wished to follow him, but his love for harry’s mom ran deep tipped the scale easily toward good. Correct: +1

snape under imperius curse in book 6: i should’ve known it wasn’t going to be that easy, but being so in love with lily potter?! whoa. snape develops to be maybe the 4th or 6th most important character in the whole novel (depending on if you ran him above or below ron and hermione in importance, clearly he ranks after harry, voldemort and dumbledore.) the chapter late in the book when harry is in the penseive watching snape’s memory was one of the most enlightening and answer-filled chapters in the whole series. Incorrect: -1

ron and hermione kiss: there were so many moments when i thought this was going to happen – starting all the way back in like book 2 – and when it actually did happen i dropped my book and gave a double fist pump. this is one of the things that could’ve really messed up the whole series for me if it hadn’t happened. i’ve been banking on it for years and reading it like they were already a pseudo-couple forever. probably Rowling’s exact intent. Correct: +1

Hogwarts finale: candy from a baby. easiest prediction ever. where else would it have happened? Godric’s Hallow? no way. the Ministry of Magic? so book five. Dursley’s?! get real. it had to be Hogwarts. the only thing that would’ve enhanced it at ALL would’ve been if she’d incorporated two things: the Quidditch field and/or Harry on a broomstick (which we still got a taste of early in the book). i wish they’d kept all the Slytherins hostage too and made ’em squirm a bit. especially Pansy Parkinson. Correct: +1

lucious malfoy dies: wrong. the dude didn’t even have a wand the entire book and he was scared the whole time. all he wanted was his son’s safety – very unlike him. i thought he was done for when voldemort borrowed his wand and it didn’t work. voldemort wasn’t quite as merciless as i thought he’d be. Incorrect -1

draco is cornered by harry but harry is merciful: boom goes the dyno. starts to duel but then pulls him out of a flaming Room of Requirement and then saves him from a Death Eater. Correct +1

peter pettigrew dies via grawp: got it, then missed it. Correct/Incorrect +0

Those-Who-Cannot-Die: ” hermoine, ginny, neville, snape…..tonks.” i got the first three, got snape wrong, but saved myself on tonks by my next call. 4/5 ain’t bad. Correct: +1

Lupin/Tonks Combo Death: here lies my loophole prediction for tonks. i figured that whatever lupin did, she would do also. i’m on a roll here. Correct: +1

Neville is a badass: okay okay. i totally nailed this one. neville steps up huge and takes out Nangini, Voldy’s snake Horcrux. this is what i would refer to as neville “saving the eve.” it’s the event immediately preceding the climax of the book (the harry potter/tom riddle duel, thus, neville flashes his chops and rules just as i’d called. Correct +1

Neville avenges his parents: man. this one surprised me, but i think i was just being idealistic in this prediciton. i thought neville would take out bellatrix lestrange for sure, avenging his parents’ torture and death at the hands of the witch. turns out bellatrix was replaced by nangini and EFFING MOLLY WEASLEY WENT OFF INSTEAD. holy crap what a moment. never ever ever saw that coming. incredible. Incorrect -1

viktor krum is saved by ron: too bad he had an insignificant role and never shows up again after bill and fleur’s wedding. Incorrect -1

fawkes is inherited by harry: i actually really thought this would happen. and then when hedwig dies in the first 100 pages i was certain that dumbledore’s phoenix would show up to replace it. i figured that dumbledore was going to have a large role somehow, and i thought it would’ve been through fawkes somehow. dangit. i loved this prediction. Incorrect -1

minerva mcgonagall turns out to have some chops: as if we didn’t all see this coming. dumbledore’s gone, so it makes sense. when she runs off snape right before the battle – so much attitude. i’m pumped to see her duel when the movie comes out in a few years. Correct +1

overall: +1 i’m not sure what this tells me other than i predicted more things write than wrong. i suppose i’ll give myself a pat on the back.

predictions about the movie still to come:
cameo appearance by either chris brown or beyonce.
linkin park for the credits music.