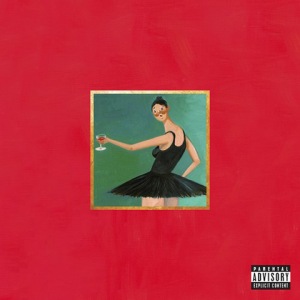 every review i read is telling me this album is phenomenal. rolling stone gives it the often-talked-about-rarely-seen 5/5 stars. PMA blog gives it a 95/100. consider me confused.

maybe i’m just selfish and want kanye circa 2007. maybe i just throw my guard up when someone (kanye) messes with near-perfection (Graduation). there has to be something off about how i’m approaching this album, because this album certainly doesn’t warrant phrases like, “It’s kanye’s best album” (rolling stone), or “It’s Kanye’s most complex and complete release and one of the most consistently impressive hip hop albums in recent years” (PMA).

so is it me? or is it them? something is just off.

the album is good. i will admit that, but it is certainly not “consistently impressive”, nor is it “the best”. its better than 808s, and that about it. individual songs can potentially compete with some off kanye’s previous 4 albums, but this album ought to be viewed as a complete album rather than a collection of individual tracks. that makes it a bit dicey for me.

don’t get me wrong though, there are bright spots: Dark Fantasy is a perfect lead track – the sampling draws you in and you catch your head bobbing to the back beat almost immediately. the aptly titled “Power” makes me feel like i’m about to take over the world in slow motion. it’s chanting, clapping Afromerica sample puts off a dynamite underdog uprising vibe. pretty sure it has already been adopted as the team entrance music in 40% of NFL stadiums. “All of the Lights” is truly brilliant. it flows beautifully from “Power” and continues the world-domination feel.

but there are also spots where i think, “who in the world thinks this sounds remotely appealing?” tracks like “Monster” and “So Appalled” make up a dismal heart to the album. if the beginning of the album is beautiful, then this is certainly the dark and twisted portion of the album. “Monster” may give me nightmares, and “So Appalled” may never make it past five in my itunes play count.

this album stands as a whole, and i respect that a great deal. i also respect the fact that kanye pulls samples from rad old school tracks (smokey robinson, cold grits, the mojo men), but he also tosses in artists i’ve never even heard of on nearly every track. both of these bits, now that i think about it, revert back to his College Dropout and Late Registration days. i was spoiled with MJ and Daft Punk samples on Graduation, but he seems to have found a certain aspect of his roots while transforming them into something new and musically forward…even if i don’t really care for where he’s progressing at certain times.

maybe the most impressive sample on the album is the use of the original “Soul Makossa” track that is probably better known (at least by me) as a Michael Jackson reference. he throws it down as the backtrack in the Bon Iver collaboration that winds the album down to a close. the shortest track on the album (a whopping 4:17), it leads with an Imogen Heap vocoder feel that builds to an and 808-heavy Soul Makossa beat that i dig quite a bit (though its possible that he wins me over simply with the blending of the sample and the “mamakusa” line in the first verse).

it starts and finishes strong (though i can’t help but be bummed out by the track 2 Kid Cudi collab – i tried, but i’m just not a Cudi fan). ultimately, save for a few songs that do anything but get me excited, the album is solid as a whole. though if i had to weigh the songs i love versus the songs i hate, it’d be an even split.

i respect the album (which i certainly did not expect to). the samples i thought were gone are present and are, truthfully, very strong. and i can ALMOST understand how this album passed with flying colors according to so many. depending on the moment – i both love it and hate it, but honestly – despite a handful of tracks i find TERRIBLE – kanye has again proven that he truly is a genius. insane? that too, but he utilizes his insanity relatively well.

ugh. i hate that i just said all that.

overall, the album is good. but not great. certainly not as good as others have claimed it to be. but as kanye says in his 35-minute film “Runaway” – “first thing in this world baby, don’t pay attention to anything you see in the news.” it’s not a 5/5 or a 95.