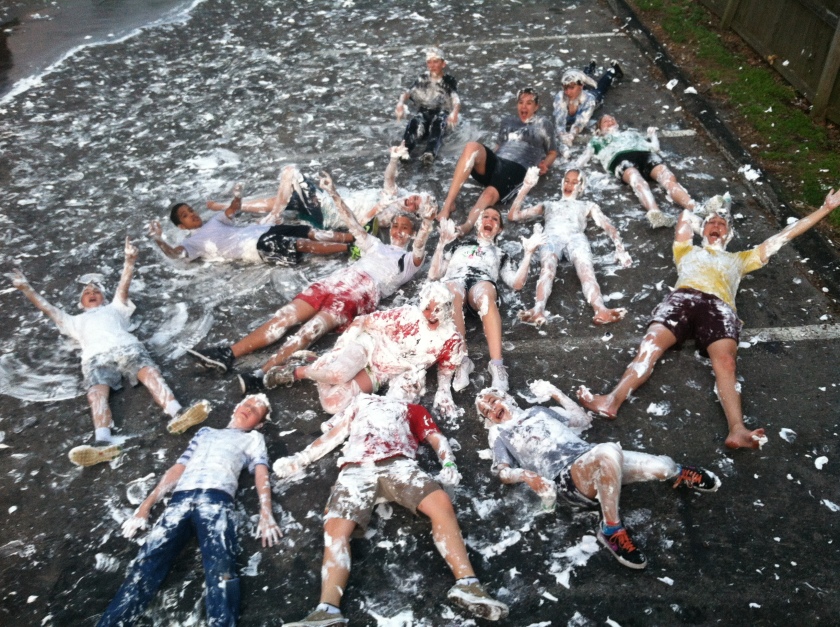 we had our middle school shaving cream fight two weeks ago. as expected, it was a blast. my favorite part of the night had nothing to do with the fight though. it was a continual conversation with one of the guys in our youth group. here’s now the conversation went down. keep in mind, this is in mid-fight while we are covered head to toe in a thick lather of shaving cream. (note: students names have been changed.)

dwayne: adam, can i have a piece of paper and a pencil?

dwayne: yeah, i know, but i really need to write something down.

apc: what is it? did you get some girl’s number?

dwayne: (with a proud grin on his face) …yep.

apc: seriously? haha! atta boy. i’d like to get you a paper and pencil, but we’re kinda in the middle of something here.

apc: how about this: if you can tell me the girl’s name, and three interesting facts about her then i’ll get you that paper and pencil.

dwayne: …uh…okay, i’ll be right back.

the kid runs away and back into the chaos of the shaving cream fight. about 10 minutes later he runs up to me again and quickly spouts off the facts.

dwayne: okay. her name is sarah. she has a friend named maddie. she likes soccer and she likes to read.

apc: wait a minute…if i go ask sarah to repeat those three facts, would she be able to?

dwayne: um…hang on just a sec!

the kid runs back into the mess and about 3 minutes later taps me on the shoulder. he’s standing there with a girl at his side.

dwayne: go ahead! ask her!

apc: (to the girl) did he ask you to name three facts about yourself?

girl: he asked me to tell you that i like soccer and reading.

apc: what about your friend maddie?

apc: wait. so you’re not sarah?

maddie: nope! sarah is my friend.

dwayne: dangit adam! you were supposed to think she was sarah!

apc: (to dwayne) have you even said two words to sarah?

dwayne: yes. er…fine, no. but can i have a piece of paper still?

nailed it. and people wonder why i love my job so much.