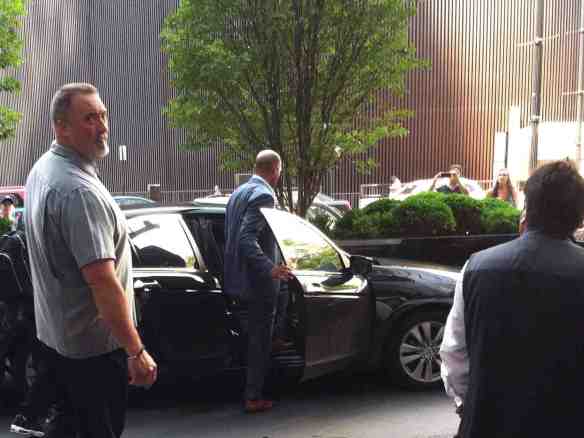 I missed the game live last night, but went back and watched the last few innings this morning. What a phenomenal celebration of a phenomenal player and person. I felt compelled to throw some thoughts down after watching Mariano Rivera, The Sandman, pitch for the last time at Yankee Stadium.

Mariano Rivera was born in Panama. His father was a fisherman. Mariano hated fishing, but it was his job too until he was twenty. Growing up, he played shortstop for the local baseball team. For equipment, he used taped up balls of fishing net and homemade gloves manufactured out of cardboard. He was good – not spectacular – but good enough to get a Yankees scout to take a gamble on him as a pitcher in 1990.

Five years later Mo made his first appearance against the California Angels as a starter. He was a really bad starter.

In his first MLB appearance, he pitched 3 1/3 innings, gave up 5 runs on 8 hits – including three-run home run to then 25-year-old Jim Edmonds that effectively knocked Rivera out of the game – and he got the loss. He went 4-6 as a starter and was platooned after the first few weeks of the season and would remain in the bullpen the rest of the 1995 year.

By the 1996 playoffs, when the Yankees beat the Braves in the World Series in 6 games, Rivera had become the set up man for closer John Wetteland, the Series MVP. The Yankees let Wetteland walk the following year to become a Ranger. It wasn’t a difficult decision when your set up man posts a 2.09 and 1.59 ERA in the regular season and playoffs respectively. The greatest closer of all time had found his place in history.

Mariano Rivera is very religious. He never hesitates to give God the credit for his entire career’s success. His best pitch, the cutter – which he discovered early in his career by messing around with new grips on the ball – he calls a “gift from God”. He doesn’t know how he figured it out, he just suddenly started throwing it. It’s just a gift that he’s used to his fullest.

Written on his glove and stitched into his cleats is the scripture reference Phil. 4:13 – “I can do all things through Christ who strengthens me.” His faith is central to who he is as a person and a player. He even dreams of becoming a pastor after his playing career is over.

What impresses me most about Mariano Rivera’s faith is not found in what he says about God in his postgame interviews or the Scripture on his (now much nicer) glove. It’s how he handles himself on and off the field that speaks most. Has there ever been a more loved and respected man to ever play the game? At his last game in Fenway Park, the Red Sox – the Yankees hated rivals – presented him with multiple gifts as a way to honor his legacy. A stadium seat. A painting. An “42” plaque autographed by the whole team. It was all a tribute to their rival’s closer. They even let him sign the bullpen wall in his final game at Fenway Park: “Mariano Rivera – Last to wear #42, thank you for everything.”

The importance of the number 42 cannot be overstated. When he signed Jackie Robinson to the Brooklyn Dodgers in 1947, Branch Rickey told Jackie that he hoped he had the guts to not say anything in response to the racial backlash that would come as a result of his playing. Robinson would have to take all the hatred, all the anger and ridicule and bear the burden without speaking up and without showing emotion. He was forced to stay silent. His silence was strong and spoke louder than anything he could’ve said.

No one else in baseball could honor Robinson’s legacy as the last man to wear 42 the way Rivera does. It’s hard to find a flaw in the man. This heroic silence is what is so admirable in how Mariano Rivera handles his faith. He doesn’t force it, doesn’t flaunt it. Doesn’t cross himself before he pitches, doesn’t point to God when he strikes someone out. He’s nearly monastic. He talks about his faith often, but never in a way that seems judgemental, forceful or insincere, and his public life is curiously silent. Has a first-ballot Hall of Famer ever done it so selflessly? And he did all this under the brightest of lights of them all: those of Yankee Stadium.

As always, Joe Posnanski, said it really well in an article from earlier today:

“How does someone close games in New York for 16 years and come out of it adored? How does someone who wears nothing but Yankees pinstripes his entire career — can you even picture Mariano Rivera without his Yankees cap on? — get honored at Fenway Park? How does someone in today’s Twittery, bloggy, First Take, Facebook, chat board, talk radio, GIF-infused world come out of a long career as universally beloved?

See, even people who loathe Mariano Rivera love him.

Scandal? Not a hint of it. Gossip? Never heard any. Embarrassing moments? Didn’t happen. Crisis manager Dan McGinn tells his clients: Biggest, best, most, first. He says that when you are one of those things, you are in the crosshairs, you are in constant danger of a significant fall. Mariano Rivera was all of those things. The biggest moments. The best closer. The most saves. The first option. And he comes out of it all immaculate, a sports legend. The perfect athlete of our time.”

I have no connection to New York City. In fact, I natually dislike everything about the Yankees simply on historic principle alone. They’re the Empire. The late George Stienbrenner’s lucrative and overpayed creation. The team that has no excuse but to succeed because they can buy anybody they want. Clemens. A-Rod. Ichiro. Soriano. Jermaine Dye. Texiera. David Cone. David Wells. Vernon Wells. Johnny Damon. Rickey Henderson. Dave Winfield. Gary Sheffield. Jason Giambi. CC Sabathia. The list goes on. Guys that could’ve gone elsewhere but were paid outrageously more to be a Yankee.

But Rivera was not bought, he was discovered in Panama and has been a Yankee since Day 1. So he’s pure in the eyes of Yankee haters like me.

As I watched the footage from last night’s game in New York – a 4-0 loss to Tampa Bay – I was surprised at how emotional I was. It was the 8th inning. One out. Girardi went to the mound and tapped his right arm to the bullpen. As Metallica’s “Enter Sandman” played loudly throughout Yankee Stadium, Rivera made his familiar jog, glove off and held in his hand, and I started smiling.

Six pitches: a fastball to Delmon Young flew into left for out number two. Then Rivera went back to his bread-and-butter. Five straight cutters to Sam Feld resulted in a chopped groundout back to the mound (Rivera has always been an excellent fielder), and he walked to the dugout after retiring two straight and stranding both baserunners. Another day at the office. I felt like clapping along with the fans.

After the Yankees failed to score in the bottom half of the 8th, they marched Rivera back out for the 9th inning.

After retiring the first two batters with ease – 1-3, F4 – Rivera prepared to face his final batter. But as a last minute surprise, Andy Pettite and Derek Jeter – the two teammates who have been with him in New York since the mid-90s – walked out to the mound to pull Rivera from the game and give him center stage. He threw 12 pitches, 11 of them cutters. Rivera looked up to see them coming toward him. The ever stoic Rivera smiled widely and met Pettite with a hug on the mound and that was it. That was the moment when the emotions rose to the surface. Tears flowed into the right shoulder of Pettite’s navy blue sweatshirt. He hugged Jeter next and then headed to the dugout to hug his coaches and the rest of his teammates.

The last person in line in the dugout processional: Alex Rodriguez. The Yankeest of the Yankees. The Cheater. A-Roid. The in the wake of the Biogenesis scandal (A-Rod is still waiting to hear the results of his appeal to MLB for his original 211 game suspension) the two met in an embrace that felt like a clash of worlds. The sinful and universally hated Rodriguez hugging the angelic and universally adored Rivera. Then A-Rod, like a little kid, put his hands on the back of Mo’s shoulders and pushed him up the dugout steps for a curtain call. The curtain call A-Rod is probably not going to get anymore. I wonder what his influence has been over the years. Over just this year. In his joy for Mariano, I saw a glimpse Mariners Alex. Pre-Bronx and pre-Biogenesis. It was refreshing. I’m not sure you could call it a conversion, but it’s the effect that Mariano Rivera has on those around him.

I think we can learn a lot from Mariano Rivera about how we live out our own faith: out of the spotlight, quietly, lovingly and through our actions. Swiping that dirt off the mound was probably the most selfish thing Mo ever did in his life. Rivera said nothing that earned him his title as the greatest closer and arguably the most adored player of all time. He let his authenticity do the talking. His cutter may have earned him the Hall of Fame, but the way he expresses his faith in God led to the celebration last night.

I pray we can all exit like The Sandman.

BTW: The picture at the top…I ran into Mariano Rivera coming out of our hotel last time we were in Chicago. The Yankees were in town playing the White Sox. He’s leaving for the game. Stood right next to the guy while he waited for his car to pull up. I was so star struck that I had nothing to say and was too scared to get my phone out until he was walking to the car. You’d be scared too if that bodyguard was staring you down with his fist clenched.