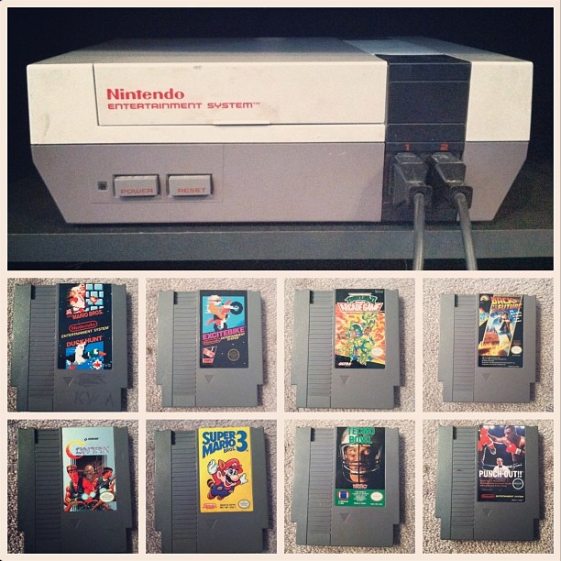 I grew up on the Nintendo Entertainment System. It has played a massive part of my life, and I still try to steal an hour or two each month to hone up on my skills. It’s important to stay fresh.

Today I have somewhere around 100 games. I’ve got the Power Pad with World Class Track Meet, the JoyStick, the Zapper and even a game called Dance Aerobics that I’m not certain how I acquired.

At first, this was just going to be a list of my Top 10 NES games. Then I realized I couldn’t cut off the list at 10, but that the first natural break was at 11. Then I decided I needed an explanation for #7, which meant I needed one for all of them. Then I realized this was way too long for just one post, so I’m splitting it into at least three (maybe four?)…we’ll see how this goes.

My grandparents only had one game to play at their house when I was a little kid, and it wasn’t this one. It was a giant green laundry bucket of wooden blocks and a couple small bouncy balls. I would spend hours constructing a track for the ball to go down. Then one year my parents got me Marble Works for christmas. It was awesome, but the creativity was limited to the different piece they gave you.

So when I finally got my Nintendo in the early 90s, it was probably a no-brainer for my parents to buy me Marble Madness to go with it.

This game only has 6 levels, and it’s fairly straight forward: you’re the marble, and your goal is to travel each level as quickly as possible before time runs out. Any extra time you have left over carries over to the next level adding up until you run out entirely.

Throw in a couple reverse-gravity levels and some M.C. Escher inspired physics and you’ve got a killer (albeit simple) game. Plus there’s a simultaneous multiplayer option, which always makes gaming life better.

Two word: Bo Jackson. I think to this day I’ve only run one play in this game. I guess two if you count the kickoffs. Up+A Run. That was all you needed assuming you were the Raiders. Rumor has it that Jerry Rice, Lawrence Taylor and Randall Cunningham (aka Eagles QB) were pretty awesome in this game too. But I have no reference for that because I’ve only ever played as Bo.

This game sort of solidified Bo Jackson as a super hero. He is simply playing on another level. Tecmo Bowl was released in 1991 at the height of his stardom. The “Bo Knows” Nike campaign was out in full force. He was tearing it up in both the NFL and the MLB. He was invincible, and apparently someone in Japan decided to turn his abilities up an extra notch in this game.

Want to open up a massive argument among sports fans? Ask them who the greatest athlete of all time is/was. The correct answer is Bo Jackson, but people will try as best as possible to convince themselves otherwise. Then there’s always that one guy at the party that tries to bring up Michael Phelps because of his gold medals. Spare me the silliness, sir.*

* – Just this morning, @MLB Instagrammed a picture of Jameis Winston in a baseball uniform asking if he was the next Bo Jackson. One commenter brilliantly responded, “Bo Jackson would snap this guy over his knee.”

Regardless of your opinion in that argument, Bo Jackson will be remembered as the greatest NES football player to ever exist. And his immortality in this game simply added to his mystique and god-like status in our world.

I should probably mention that I’m not a major Tecmo Bowl geek like a lot of people are. Probably because football has never been as important to me as baseball. This game would be way higher up on the list if I had been a bigger NFL fan growing up. In fact, if it wasn’t for Bo Jackson, this game might not have even made my list.

Is this game the reason Game Genie was invented? Because otherwise this game is impossible. I didn’t really like this game as a kid because it was so hard. But the Genie changed all that.

Contra is considered a “run and gun” game. Which means you have unlimited ammunition. Basically, if you’re not constantly firing your weapon then you’re not playing this game as well as you could. Better yet, you could pick up different types of weapons along the way: shotgun, machine gun, fireball spinning gun, and rapid fire. If you didn’t have one of these you were at an extreme disadvantage.

The perspective in this game was a little disorienting for a kid. It was from above at an angle and it followed your car around the track as it weaved back and forth through the level. This meant that at times you would be driving up, down, left or right, but no matter what your D-Pad turned appropriately, so if you were driving down, pressing Right turned you left. And if you were driving left, the Up key didn’t turn you right…the Right key did.

As a kid, I couldn’t figure it out. So I would sit on my dad’s lap and fire the weapons and drop the oil slicks.

The gameplay was fast and It got quickly frustrating, and every once in a while one of the other cars would make this “whoooooooop!” sound and out of no where start lapping everyone, which I always thought was unfair as a kid.

Okay so this probably needs an explanation.

When Nintendo was originally going to release the follow-up to Mario Bros., they created this game and did a soft release in Japan to test it out on the public.

They hated it. It was WAY too hard.

So instead, they took some other game they were developing at the time, tweaked it around a bit and turned it into the Mario follow up instead. Aha! No wonder that second game was so weird and drastically different than the 1st and 3rd editions. For example: The final boss is a giant toad. Your weapons are turnips and beets and the stage bosses are Mouser, Birdo, Shy Guy and Fry Guy? What is this nonsense? Where did this come from?

It’s because it was developed to not even be a Mario game. Which is funny to consider now that 30 years of Mario history have been dictated by this game. Some of the characters have hung around ever since (Shy Guy, Birdo, Etc.), and this game is the only reason why Luigi can jump higher and float a little bit. It’s also the introduction of Toad as a character at all.

Take a look at these screen shots and you’ll quickly be able to connect the dots between the original Mario Bros and Super Mario Bros. 3. The actual version makes complete sense. They just got a little aggressive on the difficulty level. 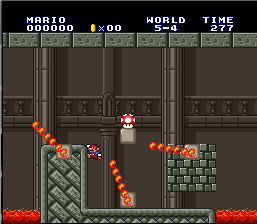 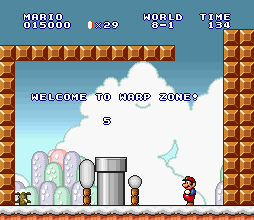 Note the difficulty in each of these pictures:

Now, I pride myself on being a Mario Master. I can beat the original game for NES in under 6 minutes pretty consistently using the warp tunnels. I have beaten SMB2, SMB3, collected all 120 stars in SMB 64, and even beaten both SMB Galaxy games for Wii. Never played Luigi’s Mansion though…just didn’t feel right.

Anyway. Even I agree this game is super hard. I’ve never come close to beating it.

Somewhere along the way, someone packaged up the Japanese release of this game and released it in the U.S. – it looks almost identical to the original Mario Bros. – but the difficulty is ratcheted way up.

There you go. The first five games on my Top 11 NES Games list. Stay tuned for the next games on the list. And please, save your complaining until I’ve completed the list and still haven’t mentioned Double Dragon and Legend of Zelda. (Harsh, I know.)

More to come. In the mean time…

What are your favorite NES games?
Any you disagree with here?
Nostalgic stories to share about any of these?
Which games are you’re hoping to see in the Top 6?

Continue on to Part II in this series.