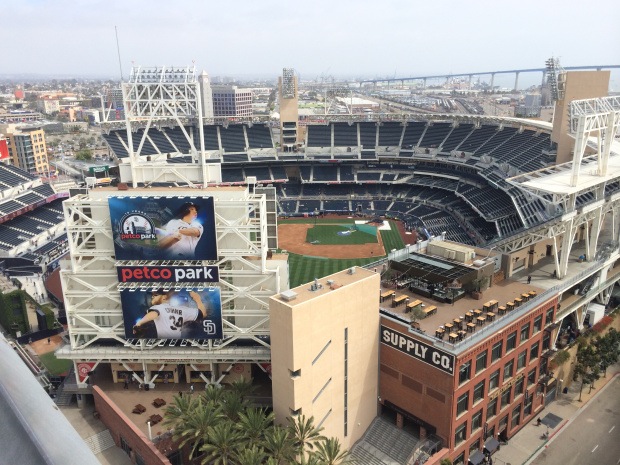 Mmmmmm. San Diego. Drink it in.

My final stop on The Smorgasbord Tour was Petco Park in downtown San Diego. Dan and I caught a quick flight over from Phoenix yesterday afternoon and were literally in town for less than 24 hours. 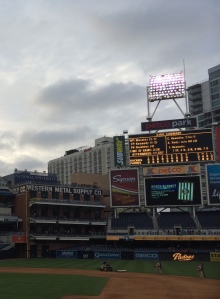 Petco Park was built in 2004, and there are a few interesting features that jump out right away that make it special. The most obvious is the incorporation of the old Western Metal Supply Co. building into the design of the park. It sits out in left field, and has a few rows of seats on each level that hang out over the field. The corner says 336 feet to the wall, but that porch hanging out makes it more like 325. It’s reminiscent of the B&O Railroad building at Baltimore’s Camden Yards.

The second is somehow even cooler: beyond the outfield wall, there is a massive green space where kids can play catch and where couples can lay out a blanket and watch the game from the top of the hillside. There’s a smaller infield where kids can play whiffle ball. It’s incredible that in the middle of a downtown area, the city would commit that much space to a green park inside the ballpark grounds. The grass can accommodate up to 2500 people. 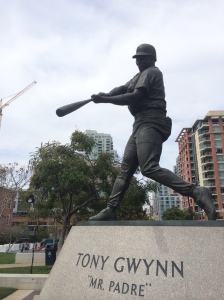 Also out in the same green space at the top of the hill: the Mr. Padre statue. Tony Gwynn. One of the greatest hitters of all time. He had 3,141 hits in his career. He won the batting title 8 different seasons. He was a 14 time All-Star. He is pretty much unquestionably the greatest Padre of all time.

Crazy stat about Tony Gwynn: he had 107 plate appearances against now Hall of Famer, Greg Maddux. He hit .415 and never struck out. Unbelievable. He deserves to be the sole statue out on the hill.

It’s clear that the Padres get the value of the ballpark providing a green paradise among the busy and concrete downtown structures. And Petco not only provides an opportunity for fans to just look at the beautiful lawns, but they can actually spend time on them out beyond CF.

I think this brings me to my biggest point about this whole project: the ballpark is a picture of paradise. It’s Heaven on Earth. It’s the perfect symbol of discovering beauty amid the ugliness of this world.

I’m typing this on a flight back to Kansas City right now. I can look out the window and see the coastline of California, then the Grand Canyon, then the Rocky Mountains, before finally landing in KC. So many people, myself included, can miss the incredible beauty right out the window. Instead, I’m typing this blog and the couple next to me is looking through SkyMall.

If my readers pull one thing out of this book project, I hope it’s the fact that God is present in all things, and when we take the time to look for beauty and creativity in the ugly and the ordinary, I believe we will find it.

So high five, Padres, for putting an emphasis on green space at Petco Park. It makes it just that much easier for fans to experience God at the ballpark. 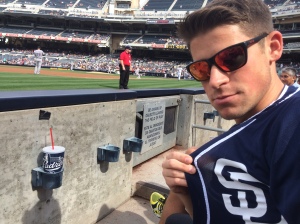 Speaking of “At The Ballpark”, I’ve been checking in everywhere I go using the MLB At The Ballpark app. They offer discounted seat upgrades, merchandise coupons and the occasional promo for a free item. This was the first time I got hooked up. Dan and I both were in the first 50 to check in for the game and we both got a free Jedd Gyorko navy alternate jersey! Suddenly we looked legit.

And speaking of paying attention, Dan and I had to be on our guard at all times yesterday. We were in the front row along the left field line – primo line drive/ground ball territory – look away for a moment and you could catch a liner to the head.

But we only got one grounder our way the whole game, and it was well out of my reach even leaning out on to the field. Oh well. We went back and faked it later. 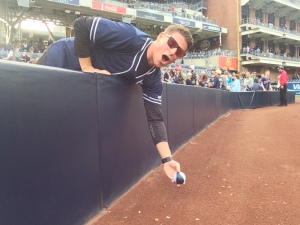 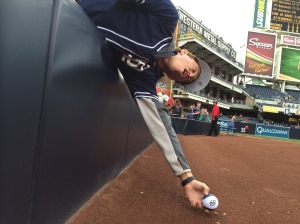 Ian Kennedy got the start for the home team, and was perfect through 4 innings and had a no hitter through 5. Then the Rockies got a lead off ground ball from Nolan Arenado that bounced off of third base and popped over third baseman Alexi Amarista’s head. I think Amarista would’ve made the play otherwise. But Arenado ended up with a double and ended the no hit bid.

The bummer is that while Kennedy was awesome, the offense did next to nothing. Xavier Nady hit a solo homer in the bottom of the 4th, but otherwise the Rockies’ Franklin Morales held them in check most of the night. The Padres seemed to be the better team, but the Rockies hits just seemed to squirt through while the Padres couldn’t catch a break.

The damage was finally done in the 7th: with 1 out, Corey Dickerson doubled and Troy Tulowitski drew another walk – he drew three on the day – then Morneau doubled to LF scoring Dickerson and moving Tulo to third.

From my perspective, it looked like the right fielder, Chris Denorfia, took a bad angle and got burned as the ball sailed over his glove.

A ground out and a single would plate Tulo and Morneau, making it 3-1 Rockies. And that was all they would need with a sputtering Padre lineup. Latroy Hawkins picked up the save.

That concludes this phase of my Ballpark Tour. The next phase picks up in early May. Now it’s back to Kansas City for a few weeks. The home team is now 3-5 on the Tour…although two of those losses are against the Royals and Cardinals, so those feel like wins for me.

Eight down. Twenty-two to go.

Up next: Los Angeles Angels.