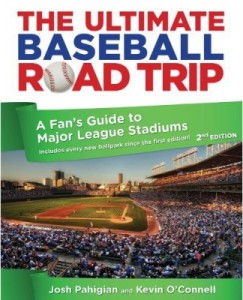 As you know, I’m visiting all 30 MLB ballparks this season as a part of my book project exploring spirituality in baseball. Here’s something I’ve quickly learned: planning the logistics alone could probably be a full-time job.

Tickets: Which games do I need to buy tickets in advance? Which ones could I scalp for half the price outside the ballpark? Could I buy the cheapest ticket available and then sit wherever I want without being told to leave my seat? Is StubHub the cheapest? What’s the view from my seat going to be like? Can I get a seat on the end of the row, or am I forced to be in the middle of the section?

Flights: What’s the cheapest flight? Does the city have multiple airports? Is Southwest always the best way to go? Should I consider driving there and making a road trip out of it instead of flying?

Ballpark: What are the “can’t miss” features of each ballpark that I need to make sure I capture in my memory? Where are the retired numbers and who do they belong to? Is there a special statue somewhere? A player memorial of some sort? A team Hall of Fame? A unique design feature?

Transportation: What’s the best way from the airport to the ballpark? Do I rent a car or rely on public transportation? Is there a taxi service like Lyft or Uber in the city I could use for cheap cab rides? And if I rent a car, where am I going to park it for the game?

Hotels: Where is the hotel in relation to the ballpark? How am I getting to and from the park to the hotel or from the airport to the hotel? Is this hotel in a good part of town? Where does the monorail drop me off in the city and how far will I have to walk to get to my hotel after landing downtown? Should I make my own bid on Priceline, or just trust Kayak’s price? Do I have friends or family that I could stay with in each city?

Food: What’s the local delicacy that I can’t miss while I’m in town? What special eats are there inside the ballpark? Is there a watering hole that needs to be frequented nearby the park before or after the game? What’s the cost of food inside compared to outside?

I guess there’s a reason “travel agent” is a career option.

This is where The Ultimate Baseball Road Trip has saved me over and over again.

While it doesn’t provide answers to all of these questions, I am thrilled to have found a great resource that has made it so much easier to plan out all the crazy logistics of each city I visit.

I came across this book on the shelf at a Half Price Books, but decided that it would be infinitely more helpful to have as a Kindle version on my phone that I could access from any park, plane, city or state. It was the right choice. Especially when I’m on the flight to the next city trying to remember what I need to see and how I need to get there.

The authors, Josh Pahigian and Kevin O’Connell, traveled to each ballpark around the country, and have provided an inventory of each one complete with ticket information, how to get to the ballpark, where to sit, where not to sit, where to park what to eat at the park and what bars/restaurants are nearby. The also provide a lengthy history of the club and ballpark as well as details of all the unique details that make each ballpark special.

I feel like I am exactly their target audience.

Before I make any ticket purchases, I pull out UBRT and make sure it’s not a scam or a poor decision. They let me know whether it’s smarter to hold off on buying tickets or to get them early. Somehow they know the exact seats that you should avoid because they have obstructed views. For example…

“Seats above Row 31 in Sections 123-125 and 107-108 are blocked by a photographer’s perch that hangs down from the second level. These seats cost far too much to be obstructed.”

That’s about AT&T Park in San Francisco, if you’re curious.

It’s amazing how thorough they’ve been in writing this book. It’s turned into my number 1 resource during this phase of my book project.

There are other books on ballparks – their history, legacy, past and present designs, most memorable moments, etc. – but this is the perfect book if you’re planning a trip to any of the 30 ballparks this season. Even if you’re not touring all of them like I am, this book is a no brainer for anyone who likes hitting up ballparks on business trips, vacations or whatever.

So far, they haven’t led me astray one bit. Thanks fellas, for helping me out on this crazy journey.