As if this post, the Royals magic number is 1.

Tonight, the Royals can change the narrative and replace both numbers with a big fat zero.

I don’t even know where to begin. My entire lifetime, the narrative of the Kansas City Royals has been this: 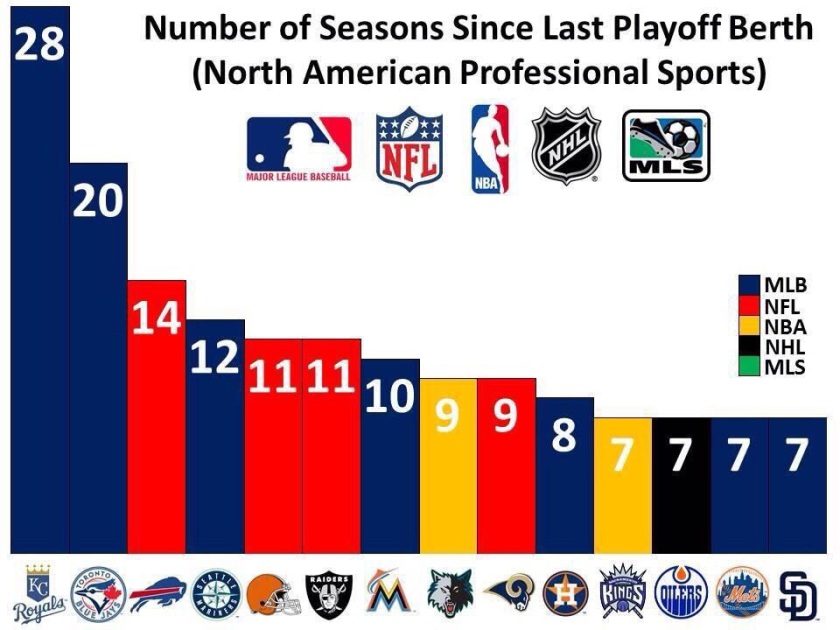 …and I have no idea what to do or how to act when that is no longer the narrative.

Is it just me, or is it almost sad to see that record go away? I mean, not really sad, but there’s part of me deep down that will miss our streak of miserable baseball. There’s a bit of comfort in knowing exactly what the narrative of this team is. No one likes losing, but at least we know who we are.

Last weekend I was in Miami. The Chiefs were playing there Sunday afternoon, and I talked with so many people about who the Dolphins are and what they can expect from them this year.

And no one knew what to say. They have no idea who their team is.

Over the last 5 years, the Dolphins have finished 7-9, 7-9, 6-10, 7-9, and 8-8 last year. Ryan Tannehill is a snoozer QB and they have zero star players. They don’t have a narrative – sometime to point at and say that, whatever it is, is who this team is – and their fans, in turn, don’t really know what they have in front of them.

Obviously, I am beyond thrilled about ending the streak and moving into the playoffs for the first time in 28 years. I root for it year after year and it is finally here.

But if this team loses the Wild Card game and becomes mediocre in years to come, we have nothing. In my core, I am terrified of that possibility.

I think that’s why Sam Mellinger felt the need to write about how some Royals fans will be disappointed with just a Wild Card spot and not the title of AL Central Champions.

I don’t think anyone is disappointed we are only making the playoffs as a Wild Card team. I think people are just scared of A. getting bounced early and B. subsequently losing our identity as a perennial loser and replacing it with the unknown.

Another example of this feeling: what do you all see when you look back at the 2003 season, the only winning season since the 1994 players strike? Do you see success? Something to be celebrated? Because I see a flukey scar on an otherwise perfectly awful stretch of existence. I’m oddly disappointed the Royals finished with 83 wins. They could have been below .500 for 20 straight years! Instead, 2003 was the short blip in our recent history that messed up the loser narrative.

This is my point, and also my fear: that 10 years from now we will look back at the 2014 season and think of this as a flukey year with nothing to show for it but an ended streak. That, to me, is not success.

But then I remember names like Yordano Ventura and Danny Duffy. I remember we have Salvador Perez and Lorenzo Cain on long term deals. We have Jason Vargas for 3 more years too. Brandon Finnegan looks extremely promising and Kyle Zimmer is nearly up too. I also remember that Alex Gordon doesn’t want to play anywhere else but KC in his career.

As I watch this team over the next three games and celebrate their first playoff appearance since 1985, I’m going to take comfort in knowing that there is a new narrative of winning beginning. And it’s a narrative that could hang around for a while. Regardless of what happens on September 30 and beyond, the Kansas City Royals are going to be contenders again. Sooner rather than later.

The narrative is going to change – probably tonight – and while I don’t know exactly what is next for the Royals beyond 2014, I can say that I have enjoyed this ride immensely and am very grateful for this franchise.

We shouldn’t be afraid of a new narrative in Kansas City. We should embrace it and enjoy every moment. This is what it’s all about, and I can’t wait to never see that stupid graph again.

Now, excuse me. I’m off to pick up some champagne.