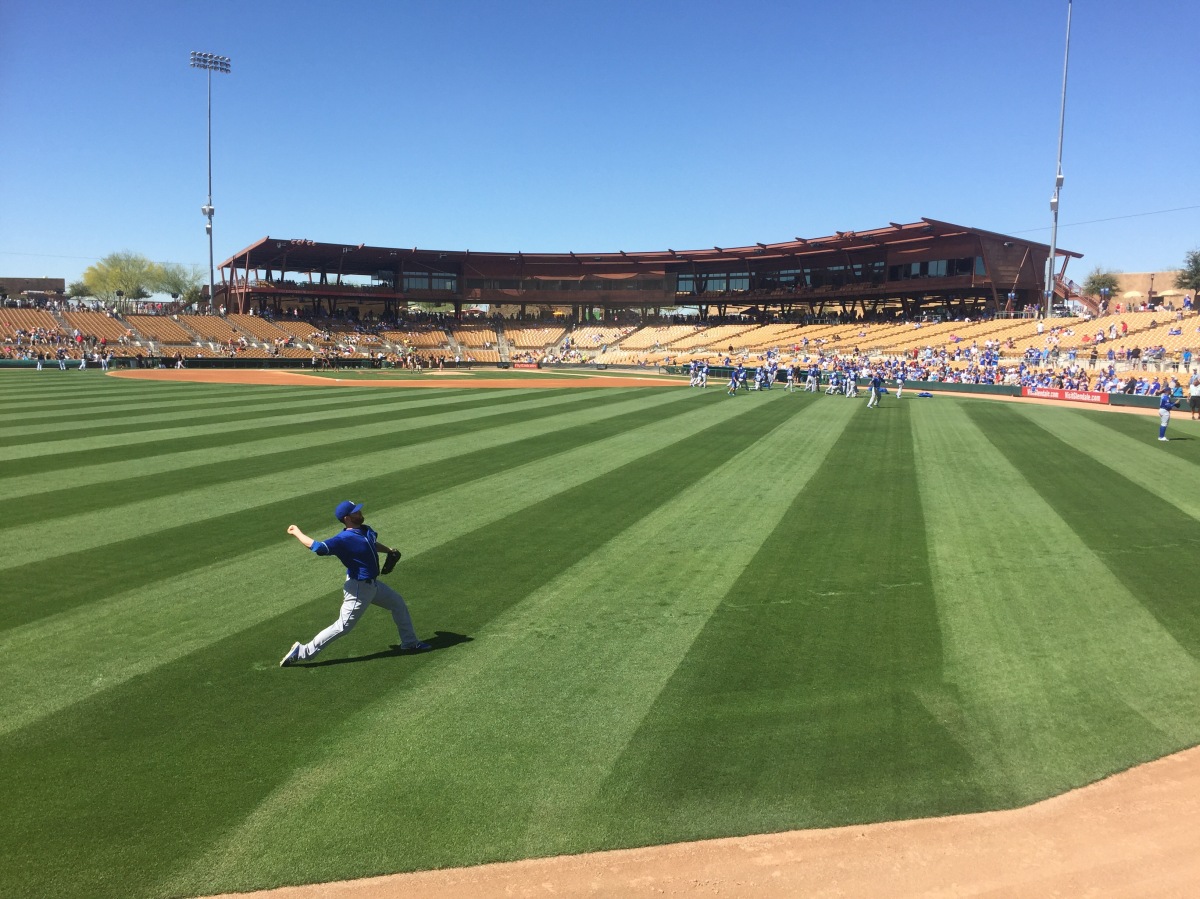 KC was at Camelback Ranch in Glendale Thursday taking on the hated White Sox. Things got weird, but we’ll get to that in a minute. Let’s start by talking about Camelback Ranch.

I’ve now been to 4 different Cactus League. Surprise (Royals, Rangers) is pretty basic as far as Spring sites go. I went to Goodyear (Reds, Indians) and Mesa (Cubs) last year, and those are both really pretty, but Camelback Ranch (Dodgers, White Sox) is on another level.

Camelback features yellow seats – similar to the pale yellow seats of Dodger Stadium – and a beautiful red-brown concourse with a tarp overhang for extra shade. The buildings are stone and iron with vegetation built in around the edges. It’s really impressive. 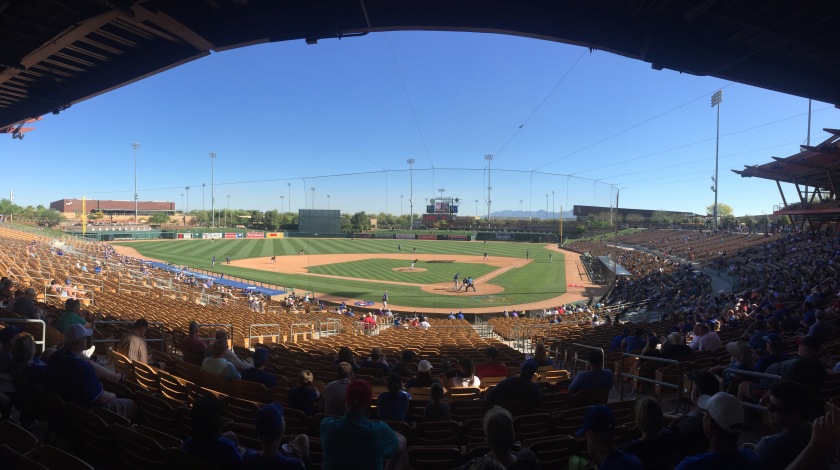 I’m hoping to make it to Salt River Fields (Diamondbacks, Rockies) on Saturday, and I hear their facility is the best out here. But for now, the park in Glendale is top of my list.

Okay, now let’s get to the weird stuff.

But the 4th inning was classic Danny Duffy. He started by giving up a single and a stolen base. Got a guy to pop out, but then promptly lost control and hit two consecutive batters – Hector Sanchez and Mike Olt. He was very deliberate in apologizing to Sanchez – not sure if he apologized to Olt or not – and then with the bases loaded and 1 out, just when you think Duffy is going to fall apart entirely, he got a strikeout and a groundout to end the inning with no damage.

The bullpen looked great too – 3 innings of 1 hit ball. Luke Hochevar threw a perfect 7th, Brian Duensing threw a perfect 8th, and Ross Ohlendorf – who has had an absolutely dreadful Spring to this point – stranded a leadoff double in the 9th.

Okay, now let’s get weirder. In the 5th inning Raymond Fuentes singled and Dusty Coleman walked, bringing up Tony Cruz with two on and nobody out.

The Royals tried a double hit and run. Coleman and Fuentes broke with the pitch and Cruz laced a fastball hard into left field. The ball carried and found leather on a line. The left fielder tossed it to the second baseman who tossed it on to the pitcher covering first, and the White Sox had turned a triple play. A 7-4-1 TP for those of you keeping score at home. Inning over.

Yet somehow things got even weirder.

The box score says the Sox committed 3 errors on the day, but those of us who were there know that was extremely generous. It easily could’ve been 5 or 6.

The most egregious “hit” call came in the 7th when the Royals blew the game open. They batted around and put up 7 runs.

Drew Butera was playing first base. In fact, all three KC catchers were in the game – Cruz catching, Salvador Perez DHing. Butera hit a line drive into left center. The left fielder took a bad angle and couldn’t close on it. Then he fell over. The ball rolled to the wall.

The center fielder, backing up the play, reached the ball first. He bent over to pick it up. He couldn’t. At this point, Butera is somewhere between second and third. The defender tried again and the ball evaded him again. Butera came around to score standing up – the Royals second inside the parker in three days.

But no, the outfield did nothing wrong, let’s give him a home run. Sure.

Royals won 9-2. The White Sox looked really terrible. And I sure don’t care much for Brett Lawrie. He couldn’t be a better fit on this Chicago team.

Headed back to Surprise today. Diamondbacks @ Kansas City. Until tomorrow.