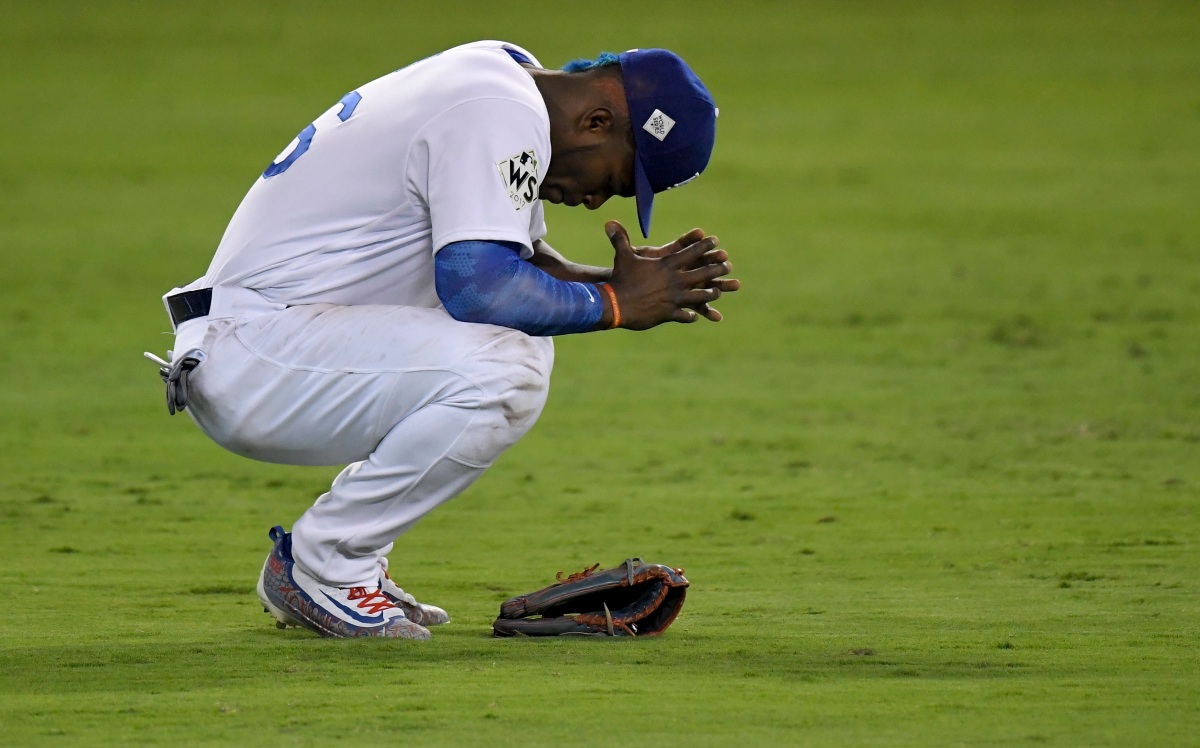 What a game. The Astros beat the Dodgers last night in one of the more entertaining World Series games you’ll ever see.

Dodgers led early. Astros tied it late and took the lead in extras. Dodgers tied it up again. Astros took the lead back. Dodgers brought the tying run to the plate in the 12th, but couldn’t close the gap a second time. Astros won 7-6.

As is the case with most baseball games played at the highest level, the one came down to a handful of plays that tipped the scale the Astros’ way. This one seemed to have a dozen such moments – “game of inches” moments where neither team necessarily did one thing better than the other, the ball simply found a glove or didn’t, and they all would’ve had drastic implications on the turnout of the game.

For example, the ball that landed in front of a diving Chris Taylor. Instead of bouncing over the centerfielder’s head and rolling to the wall for a possible triple or inside-the-park home run, it caught the bill of Taylor’s cap and rebounded directly into the hands of Joc Pederson in left. Game of inches.

Or another example: In the bottom of the 11th, down two runs, both Corey Seager and Justin Turner hit rockets off Houston reliever Chris Devenski. Seager’s found the mitt of Cameron Maybin deep in the outfield, Turner’s was hit directly to Carlos Correa. If either of those balls are hit slightly up, down, left or right on the bat/ball, Charlie Culberson‘s home run is a 2- or 3-run shot instead, and his reaction around the bases is much more appropriate to the situation. Game of inches.

A third example: In the bottom of the 10th with the game tied and two outs, Devenski tried to pick Enrique Hernandez off of second base. The throw was wild and sailed 10 feet to the shortstop side of the base. Cameron Maybin was shifted towards right field and there was a lot of green grass available out in left-center. For a moment, it looked like Hernandez was going to advance to third, and potentially score if Maybin wasn’t able to scamper over to it quick enough. Instead, the ball hit umpire Laz Diaz in the thigh, thudded to the ground. Instead of being the winning run, Hernandez wasn’t able to advance advance at all. Game of inches.

The moment that defined the game for me more than any other is really two moments – the second a response to the first. This “game of inches” moment happened in the top of the 8th, with the Dodgers leading 3-1.

Alex Bregman led off and sliced a fly ball into the right field corner. Off the bat it seemed destined to find grass, but Yasiel Puig made a long long run and looked to have a beat on it and this wouldn’t be his first magical defensive play. He dove headfirst toward the corner, glove hand extended. The ball found leather, but not enough leather. It ricocheted off Puig’s glove, bounced once off the outfield grass and over the short wall in the right field corner for a ground rule double. Game of inches.

Within a matter of seconds, Puig hopped to his feet and did this:

A quick aside: Yasiel Puig is wonderful and so good for the game of baseball. He’s having fun, but not at the expense of his team or his own success. There have been times a times when many of us – myself included – wondered whether he would be able to dial it in to where his energy was a positive and not a negative. When he was sent down to AAA in Oklahoma City last season I wondered if Puig’s actions were indeed misguided. I think he’s proven this season that he can be fun and quirky and play with significant passion without it negatively impacting the outcome of the game.

Yet announcers continue to use words like “emotion” and “passion” (which I recognize I also used above) to describe him, but their words are still laced with so much disdain.  No one defends him. No one says they like him or support him or even enjoy him. Instead, they drop judgmental comments about his antics and say loudly that they disapprove without needing to say it at all. So of course when he stands up from missing the fly ball, the internet and the broadcast booth are too focused on the outburst and fail to understand what’s totally happening in that moment.

Puig’s glove spike reminded me of Moises Alou’s outburst in the 2003 NLCS when Steve Bartman leaned over the left field rail at Wrigley Field and interfered with a ball that probably would’ve landed in Alou’s glove. Alou threw a tantrum, spiked his glove and glowered at Bartman from the left field foul line. I remember watching that game thinking he was acting like such a baby. Throwing your glove because and barking at a fan? Cmon, man.

But there’s an obvious difference between the two situations. Alou was crying about someone else, about something out of his control. Alou’s screaming and whining is directed away from himself and toward Bartman. Puig is mad at himself, his own effort. Which is always totally fine in sports.

The glove spike communicates three things to me:

And what’s the situation? Instead of making the first out of the inning, there’s now a runner in scoring position in a 2-run game with the Astros best bats coming up in Jose Altuve and Carlos Correa. Second, and of perhaps even more importance, Dave Roberts is forced to turn to Kenley Jansen earlier than desired to get the final 6 outs. If the tying run isn’t at the plate, Jansen likely stays in the bullpen and starts with a fresh 9th.

Altuve advanced Bregman to third on a ground out. Correa slapped one up the middle for a single, scoring Bregman and making it a 1-run ballgame. Jansen then gave up a solo homer to Marwin Gonzalez in the 9th to tie the game, 3-3.

Now, if Puig catches that ball, it’s the first out of the inning, Altuve’s grounder is the second out, and Correa is stranded at first because Yuli Gurriel popped out immediately after and that would’ve ended the inning. Granted, all of those happenings could have changed with 1 out and nobody on and Brandon Morrow still pitching instead of Kenley Jansen.

Baseball-Reference.com gave the Astros a 13% chance of victory before the Bregman double, and a 22% chance after – the miss cost the Dodgers 9%. If Puig catches the ball, that number likely drops from 13% to something like 7%, a difference of 4%. Overall, a 15% swing in winning probability added (WPA).

Here’s the other thing that moment did though: it lit a fire in Yasiel Puig. Yes, he always plays with passion, but a moment like that gets under your skin and effects how you view the game from that point farther. Puig feels responsible for a chunk of the team’s winning probability (again, around 15%), and he wants to do right by himself and his team. A player like Puig wants to fix where he erred, and his opportunity to do it is at the plate.

Which brings us to the second moment – the response to the first.

By the time Puig bats again, he’s leading off the bottom of the 10th and the Astros have taken a 5-3 lead. Houston is sitting pretty at a 91% chance to win the game.

Puig, of course, destroys the baseball and does this:

Do you see what Puig does here?! He is re-writing his own narrative. This is so great, and I hope I can do a solid job explaining what I love about it.

First, he unloads on the baseball, undoing the damage he feels he inflicted by being unable to corral the catch earlier (which few players even get to, let alone nearly catch). That homer dropped the Astros’ WPA from 91% to 80% according to Baseball-Reference. That’s 11%, which is greater than 9%, if you’re keeping score at home like Puig undoubtedly is in hi ahead. If he’d made an out, the Astros WPA jumps to something like 96%, a jump of 5% and an overall net of 16%, which is greater than 15%, the overall WPA adjustment when he didn’t catch the ball. In one swing, he has mathematically salvaged what he feels he shouldn’t have allowed earlier.

But he’s not done – and this is the amazing part: Puig, the guy who is notorious for smooth yet obscene batflips in all sorts of moments, slowly and methodically places the murder weapon on the grass.

Because he spiked the glove in the field.

Do you see what he’s doing?! It’s brilliant. He made up for the ground rule double by hitting the dinger, but he’s also reconciling his reaction to the play. Setting down the bat undoes his glove spike! His response in the good undoes his response in the bad. If he bat flips, he’s doubling down on passion. But by setting the bat down gently, he is actively adjusting his own narrative away from the out of control player with too much emotion for the game and toward the centered ballplayer who is focused enough to perform calmly in the biggest of moments.

Of course, after reconciling his performance and his character, he’s back even when he came up to the plate as the tying run with two outs in the bottom of the 11th. This time he doesn’t have a score to settle so who knows what he’s going to do.