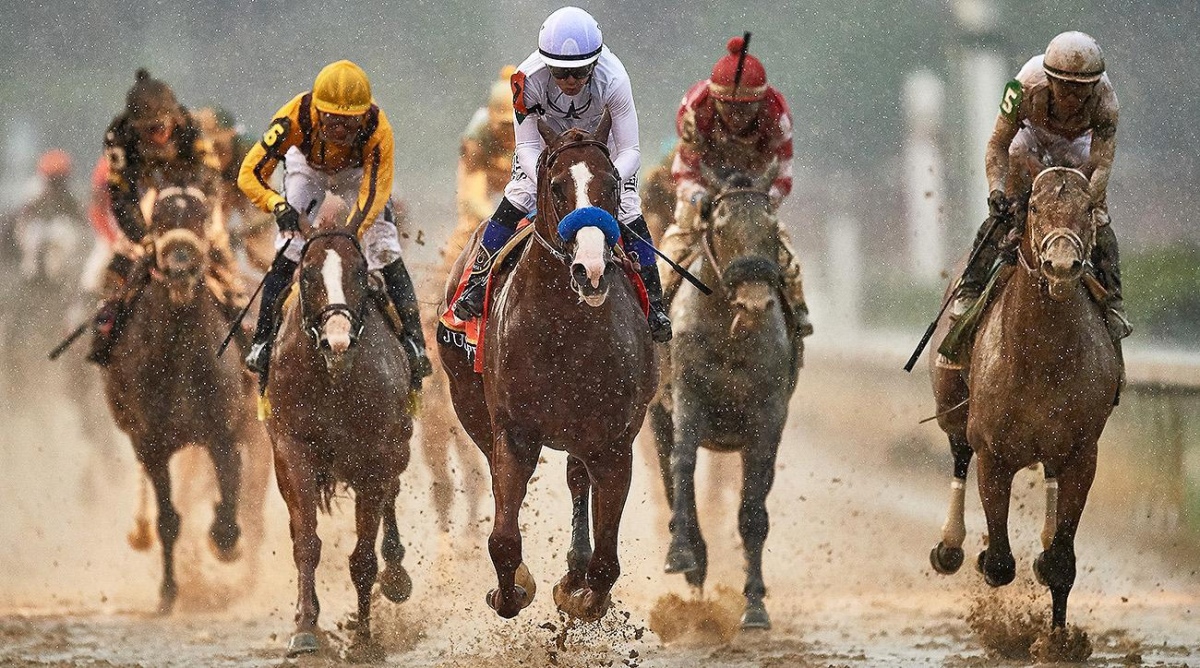 It’s Derby week and it’s already been a doozy.

A wide open race opened up even wider when Omaha Beach, the early betting favorite, was scratched with a breathing issue on Wednesday. He might be back in time for the Preakness, but he will not be running at Churchill Downs this weekend.

This obviously changes everything.

The bummer is that after my miserable performance last year, I’ve got the top pick in the draft Saturday morning. I would’ve likely taken Omaha Beach, but now I have no idea which horse I’m going with. I’ve narrowed it to…5. Yeah, I think just 5.

Every year I write up my angle on the race, and, after the news broke Wednesday, I think it makes sense to just go through the horses I’m considering and talk about how I think this race plays out for each.

But first, let’s look at all the horses…

As I understand it, the scratch of the #12 horse means everybody will move up a spot in the starting gate but wear their original number. (So, for example, Code of Honor will now start from 12 but wear 13.)

UPDATE: Haikal has now been scratched too with a foot abscess. Nineteen horses will run from gates 2-20.

Here’s the list with updated bets as of Thursday afternoon…

After watching all the prep races and considering the running style and gate positions, a few stand out as potential picks to win this year: War of Will, Maximum Security, Tacitus, Improbable, and Game Winner.

This horse seemed destined to be a Derby favorite for most of the prep season, but after an awkward misstep a few lengths out the gate in his last race, the Florida Derby, he just hung with the pack and finished 9th. Prior to that step his trajectory was looking very strong. Derby winners are almost always coming off a podium finish in their last prep. War of Will isn’t.

That said, all the workout buzz this past week has been extremely favorable. The inside rail would normally be a bad draw, but this horse will need to get out near the front to help pace the pack regardless. In an overall slower race, I like War of Will to do well. It’s a matter of how well he has healed since Florida, and he seems healthy.

UPDATE: Haikal scratching means everybody shifts out from the wall. More room for War of Will to work. Post 1 doesn’t look so bad now.

The only true pacesetter in this race. With Omaha Beach out, I don’t think he’ll be as pressed to push the tempo. If it’s a slow race, which I think it will be, Maximum Security could go gate to wire.

But can he go the extra distance in a longer race? He has managed every distance to date. We’ll see, but he’s also the only horse here who has never lost.

He’s never finished worse than 2nd. After winning his first 3, he finished 2nd in the Arkansas Derby to Omaha Beach and the Rebel Stakes to Long Range Toddy. Both races were slightly wet ones, and it looks like rain may be in the forecast this weekend in Louisville. Omaha Beach was probably the better horse, but Improbable was forced 3-wide and couldn’t catch up. When Long Range Toddy beat him Improbable was forced to race four-wide the whole race cause he started far outside. He’s in prime position this time around, and Omaha Beach isn’t running.

Like Improbable, this horse has always finished Top 2. Two first place finishes back in late 2018, and two second place finished this spring: by a nose to Omaha Beach at the Rebel Stakes, and by a half-length to Roadster at Santa Anita.

Game Winner has the pedigree to suggests he can go longer distances. The gate shift from 16 to 15 is a significant one, because now he’s positioned on the inside edge of the auxiliary gate, which means he’ll have more room to work with to start. On top of that, the four horses to the inside of Game Winner – Master Fencer, Win Win Win, Code of Honor, Haikal – are ALL closers, so he will have plenty of space in which to maneuver early.

The 8-spot is the perfect starting gate. With the pacesetter to his left and a closer to his right, Tacitus won’t get pinched early and can settle in comfortably behind Improbable/Maximum Security/War of Will.

Around the last turn he’ll be silently lurking almost lazily off the lead mid-pack then suddenly emerge with a lot left in the tank. That’s his move. You almost forget he’s even in the race until he suddenly emerges and you’re wondering if he somehow just materialized in front. This feels like a Tacitus-type race in that it’s slow and with no clear favorite, it’s not hard to imagine that sort of finish.

Also of note: jockey Jose Ortiz chose to ride Tacitus over Improbable, then Ortiz’s brother Irad was then tapped for the latter.

Now let’s talk about a few I don’t…

Omaha Beach and Roadster were both jockeyed by Mike Smith, who was forced to make a choice between the two for the derby. He picked Omaha Beach. If he wasn’t good enough for the jockey, he’s not good enough to pick at #1. I was all prepared to say that nobody has ever won from gate position 17, but now that Omaha Beach is out, he’ll slide into #16 instead. Still wearing 17, however.

Instead, LRT will be in Gate 17. Bad luck. No can do. Even if he did best Improbable a few months ago….can’t do it. Although, he does finish well.

Okay, he’s 50-1, so this isn’t a bold prediction here at all, but every year they invite a horse from Japan who qualifies to travel to Kentucky. This year they invited 3 different horses until somebody – Master Fencer – finally said yes.

For some reason the 4th best horse from Japan traveling halfway around the globe doesn’t inspire much confidence.

Two years in a row the Dubai winner has finished dead last in Kentucky – Mendlessohn (2018) and Thunder Snow (2017). Mendlessohn won in Dubai last year by like 17 lengths. Parfait stalked well before he made a slick move down the stretch to win it this year. Don’t care. I won’t be conned by the UAE Derby winner again. I’m not touching PQP.

Tax is a poor man’s Tacitus with a terrible starting position at #2. No way he escapes the stronger contenders to the outside and War of Will inside. Good horse, but not this race.

Okay, that’s enough of what I think for this year. Not sure which way I’m going to go yet, but I better know by Saturday!

Just writing it out has helped me narrow it to 3.

The draft order is based on the previous year’s results. All horses are picked. We pick 1-8 then snake back to the start. Remaining picks go to the back end again.

Here’s how the picks play out…

Like I said, this is not the year to have the #1 pick. But here we are.

Holly, of course, won with Justify last year, who went on to win the Triple Crown. Dad picked Audible at 1 allowing to Holly grab Justify at 2. #Regrets

The draft is going down Saturday, 9:30AM CST.

I’m running Tacitus and Long Range Toddy. Great draft from Karlie, who has two of my favorites and could be running 1-2 into the final turn (which is exactly when Tacitus will sneak up and take over). Improbable will be there. Probably Game Winner too.

The race runs at 5:50PM CST. I’ll check back in then with the results.

Results will be posted after the race.