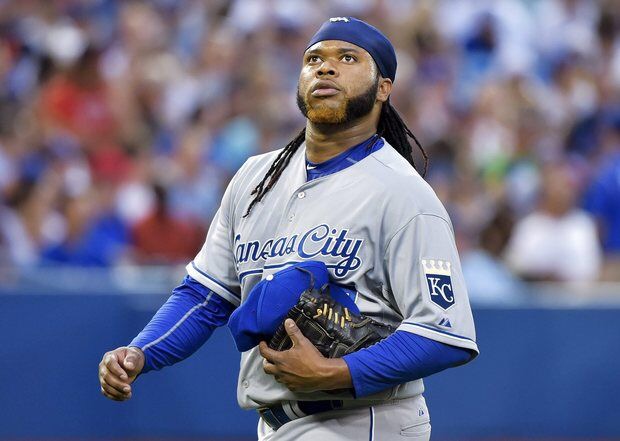 The Royals gave up three left-handed pitching prospects for a couple months worth of Johnny Beisbol. In his first few starts, Cueto didn’t disappoint. In his first start at Kauffman Stadium, he threw a complete game shutout – a feat that hadn’t been done by a Royals starter all year. Since then, it’s been mostly downhill.
Going into Sunday, in his last 4 starts his ERA is a burgeoning 9.45. The Red Sox, Orioles, Tigers and White Sox have each shelled Cueto. It’s an anomaly in his career, and it’s easy to brush off and preach “sample size,” but at a certain point it still gets a bit unnerving.

Here’s something pretty interesting I’m taking a look at:

For those unfamiliar with BABIP, it stands for Batting Average on Balls In Play and measures the average of non-homerun balls put in play that end up as hits. So if a guy goes 3-5 with a homer, strikeout, and a ground out, his BABIP is .667: the homer and strikeout don’t come into play, so of balls put in play, he went 2 for 3. Makes sense, yeah?

This metric depends on three variables: talent, defense and luck.

Batters have more control over their talent on BABIP than pitchers do. Hitters can attempt to “hit it where they ain’t” – they can place their hits somewhat. Pitchers have a limited ability to really control where the ball goes off the bat. They can pitch down in the zone to induce ground balls, and they can throw on the outer half to coax the hitter to take it the opposite way, but they ultimately can’t determine the hitter’s bat speed to know what direction that ball will go. It’s much more determinant on the other two metrics: defense and luck.

So when measuring pitchers, BABIP can give a great understanding of how a pitcher is being aided or hurt by good/bad defense or good/bad luck. Better hitters have higher BABIP. Better pitchers have lower BABIP. League average is around .300 for both. Cueto’s career BABIP against is .274.

Uncharacteristically, Cueto’s last four games have all had a BABIP over .375. Here’s the list of games in the last three years of Cueto’s career where he posted a .375 BABIP or above.

It’s happened 5 times since Cueto joined Royals. To find the previous 5 times you’ve got to scroll his game log all the way back to September 2012 (I chose to omit 6/26/13 since he left with an injury after only 1.0 innings). So, in the number of times he’s posted a .375+ BABIP in the past three years…

In 221 career starts it’s only happened 40 times, but 1/8 of those have occurred in the past month. What is going on here? What would cause such an insane change in numbers in such a short amount of time?

At first glance, it makes no sense at all. One would assume when an All-Star caliber pitcher joins the team with the best defense in baseball, his BABIP would improve, not get worse. Right? Then what’s going on here?

The easiest solution here is to chalk it up to crummy luck. It’s also the laziest solution, so I’m wary to say that’s the problem. Cueto would have to be insanely unlucky to offset the benefit of the Royals defense. Besides, doesn’t it seem a bit too coincidental that the moment he changes teams, leagues and ballparks this spike occurs?

Perhaps the Royals defense hasn’t been as strong as usual. Alex Gordon has been out, and Ben Zobrist has been stepping in for he and Omar Infante lately. Zobrist is good, but he’s not as solid defensively as Omar and Alex. Throw in Jonny Gomes and Paulo Orlando, and the defense isn’t quite what it usually is. In Cueto’s last start, Christian Colon played 2B and Kendrys Morales played 1B. Three runs scored on grounders through the infield.

But as a whole, Cueto hasn’t given up groundball hits. It’s mostly been the result of medium to hard hit liners to the outfield. Nothing much the outfield can do about those. Besides, Jonny Gomes hasn’t even played while Cueto has been pitching. To me, it has very little, if anything, to do with the defense.

Jeff Sullivan over at Fangraphs came up with a three-part solution last week: Cueto’s faced tougher competition over the past few starts in the AL, he no longer gets to face pitchers since leaving the NL, and he’s simply made a few mistake pitches in the zone.

But Fangraphs doesn’t mention BABIP, and I think it creates a better framework in this instance. Fangraphs splits up his batting average against (BAA) over his entire career and found that this spike is right in line with others he’s had in the past. But this BABIP spike is unprecedented. He has never ever had a BABIP spike like this. It can’t just be chalked up to another peak on a chart. This is different.

Which brings me to the real question: Is it a major problem? Or is it just a freaky anomaly? With our defense, we have to assume this is just bad luck, right? It feels lazy, but it’s the only thing I can figure that would cause such a spike.

But what about talent? The one thing I’ll add in that regard is this: Johnny’s slider has been an issue lately. It’s never been his best pitch – he throws a fastball or cutter about 71% of the time and a slider only 8% – but since he came to KC, his slider has been consistently negative in value. The reason: he’s throwing it just a tick too fast, leaving it out over the plate. It’s the pitch that has consistently burned him.

All this to say, I think there are tweaks that Cueto can make to become more effective, but overall, this streak of poor starts is strangely unlucky. Seems like a cop out, but his BABIP is so skewed it has to be the truth, honestly. Heck, maybe this is a good thing. Law of Averages would suggest that he’s due to have some good luck around the corner.

Clean up that slider Johnny, and keep relying on your defense and you’ll be fine.

And fans – keep calm and Cueto on.

Photo cred: mlive.com accessed here. (Highly recommend clicking over if only to laugh at the headline.)