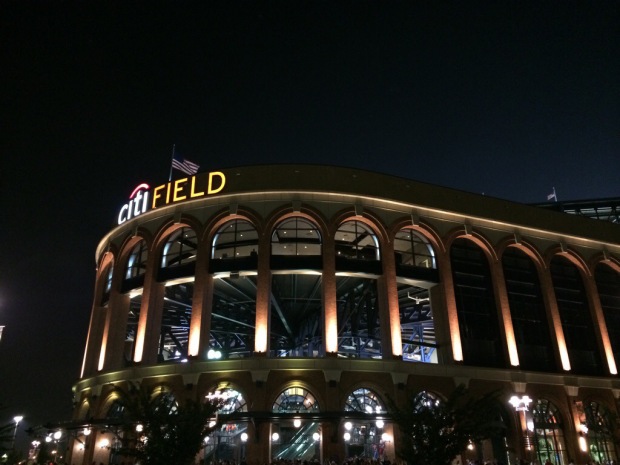 Every history of the Mets begins with westward expansion.

In 1957, there were 3 MLB clubs in New York: the Yankees, Giants and Brooklyn Dodgers. Then in 1958, only the Yankees were left as the Giants and Dodgers left for California.

Giants and Dodgers fans were without a team for 4 years, and the New York Metropolitans were supposed to be the answer when they began in 1962.

In 1962, the Dodgers won 102 games in LA but finished second in the NL to the Giants who won 103 games. The Yankees took the AL with 97 games and won the World Series over the Giants in 7 games.

The Mets, in their inaugural year, lost a miserable 120 games.

There’s never been a worse record since.

What made it even worse: they were playing in the New York Polo Grounds, the recently abandoned home of the Giants. The team that left went to the World Series against the cross town rival Yankees. The replacement Mets put up the worst record since the 1935 Boston Braves, and the 3rd worst record ever recorded.

I can only imagine how much of an eye roll the 1962 Mets were. This team was supposed to replace two powerhouse ball clubs. Instead…what an embarrassment.

They moved from Washington Heights in Upper Manhattan to Queens in 1965, and still piddled around in the bottom of the standings until 1969 when somehow, by some stroke of luck, they actually managed to win it all. The Miracle Mets had won their first World Series championship.

They won their only other ring in 1986. The Mets roster that year was extremely impressive: Daryl Strawberry, Keith Hernandez, Mookie Wilson, Gary Carter, George Foster, Lenny Dykstra, and Dwight Gooden holding down the pitching staff.

But it still took one of the biggest blunders in baseball history for them to win it all.

That was in Shea Stadium, where the Mets played until 2008. Today they play at Citi Field, which is basically a giant homage to Ebbets Field where the Brooklyn Dodgers used to play. Here’s a look at the entryway rotunda at both Citi and Ebbets Field… 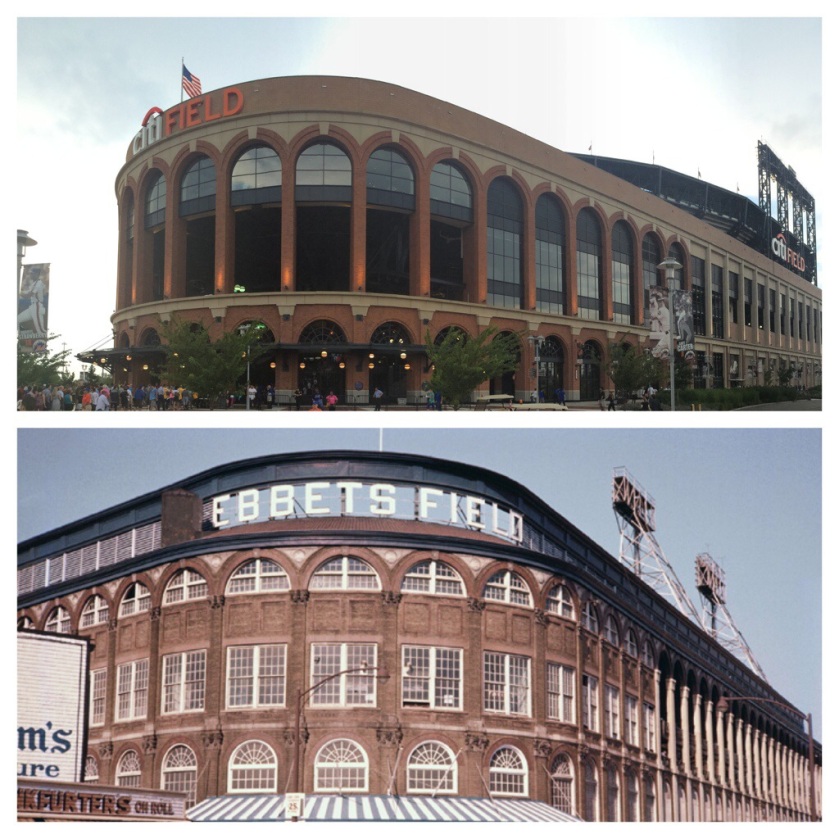 At Citi, they even call it the “Jackie Robinson Rotunda.” The interior is packed with Jackie and Branch Rickey quotes and video clips. It’s cool, but somewhat awkward since the Dodgers still exist.

In fact, the Mets colors – blue and orange – are a blending of the Dodgers and Giants colors.

Karlie and I were at the game last night together and she made the comment that the Mets feel “generic”. Their mascot is a man with a baseball for a head – same as Cincinnati. Their colors are copied from past teams. Their ballpark is copied too. They share a city – their team name is the “Metropolitans” which was supposed to unite both former fan bases into one. They serve “Brooklyn Lager” and don’t even have a hot dog named after their mascot. C’mon guys. Find an identity.

They just don’t seem to have much that is uniquely theirs.

In fact, the Queens fan base isn’t even uniquely theirs…at all. In a map released recently by Facebook and featured in the NY Times, it was discovered that the “Yankees are the preferred team everywhere in New York City.” Even the area surrounding the ballpark has more Yankees fans than Mets fans.

The fan reclamation movement of the 1960s seems to have failed. Even Jay-Z, a Brooklyn boy, is a huge Yankees fan.

The last time the Mets made the World Series was 2000, and they had to play the Yankees. The Subway Series (which I learned yesterday is technically the 7 train between Manhattan and Flushing) was won by the Yankees and they celebrated on field at Shea Stadium in front of probably more Yankees than Mets fans. Sigh.

It almost starts making you feel sorry for the Mets. So much baggage with their franchise. Feeling the pressure of two historic franchises that came before them, yet playing in the shadow of their big brother in the Bronx. It’s not a successful setup. It’s like they were born into a broken family system.

Family systems are so interesting to me. We inherit the system we are born into – the emotional strains, abuse and disease histories, dysfunction, abandonment, birth order, emotional distancing, employment history, marital conflict, etc. – and none of it is in our control at birth. Life is a complex web of overlapping human relationships that all impact one another. The key to healthily navigating broken family systems is managing to differentiate yourself from the emotional system.

Every single one of us is born into a different system and our task is to learn to navigate it healthily.

Discovering your own identity is crucial to navigating life emotionally healthy. And the Mets don’t seem to have their own identity.

Murray Bowen was the pioneer behind Family Systems Theory. I encourage everyone to go check it out more in depth.

I’m excited to look into this connection more as I write this chapter of the book. We talk about this stuff all the time in our seminary classes and ministry spheres.

Probably more to talk about, but for now, I’m going to move on to some game notes. I’m halfway to Philly right now and need to start researching where I’m going to watch the USA/Germany match. Moving on.

I saw the Royals and Cardinals win their home openers. I saw Atlanta win the first stop on my Smorgasbord Tour in early April. And I saw both Oakland and the Giants win while I was in the Bay Area.

After last night, I can add the Mets to the ever expanding list of teams I’ve watched lose this year: Reds, Rangers, Astros, D-Backs, Padres, Dodgers, Mariners, Rockies, Angels, and Mets.

Tuesday night, the Mets pounded the A’s 10-1. New York had won 3 straight. But then I came to town and had to wreck their mojo.

Last night’s game marked the third time I’ve seen Oakland win this season, and my wife, who has been with me for all three matchups, is basically an A’s fan at this point. Yoenis Cespedes is her boy.

The Mets’ Zach Wheeler was coming off the best start of his career shutting out Miami last week, but he didn’t have it last night. A Brandon Moss HR made it 2-0 after 1, and a string of walks and singles scored another before Cespedes doubled with the bases loaded to make it 6-0 after 2.

And that was Wheelers night. They pinch hit for him in the bottom half of the second: 2 IP, 6 H, 6 ER.

The A’s would add two more before the Mets could do anything offensively. Coco Crisp hit a solo HR and the Mets conceded another run on a double play. 8-0 after 6.

Then the Mets started to mount a comeback: Lucas Duda hit a 3 run shot in the 7th that made it 8-3 and caused the “big apple” beyond the CF wall to spring to life. Every Mets HR causes the apple to rise up from behind the wall. It’s a pretty stupid stadium gimmick.

We saw it again in the 8th when Chris Young homered and made it 8-5. But that’s all the runs Oakland would allow. Sean Doolittle, the A’s closer and a terrific follow on Twitter, struck out the side in the 9th to end it. 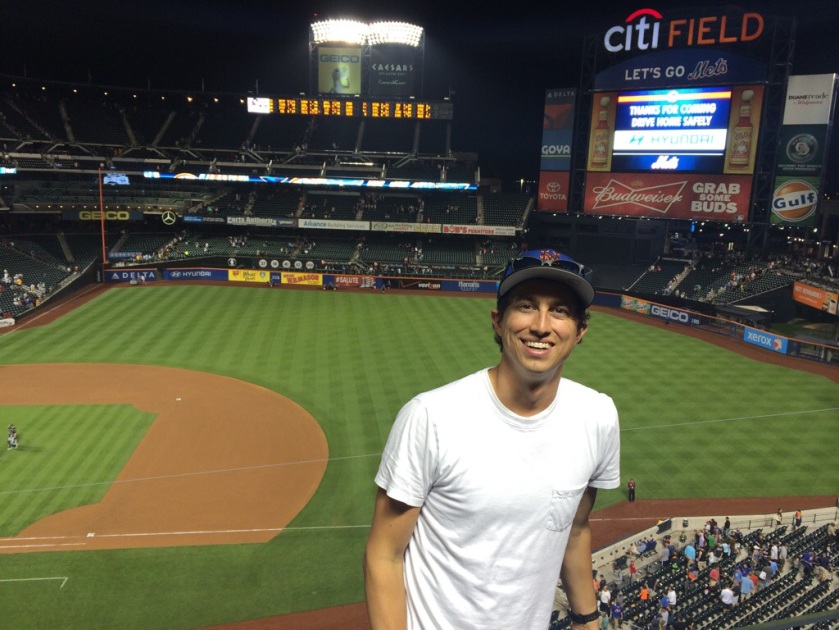 Fifteen down. Fifteen to go.

Up Next: Philadelphia Phillies.