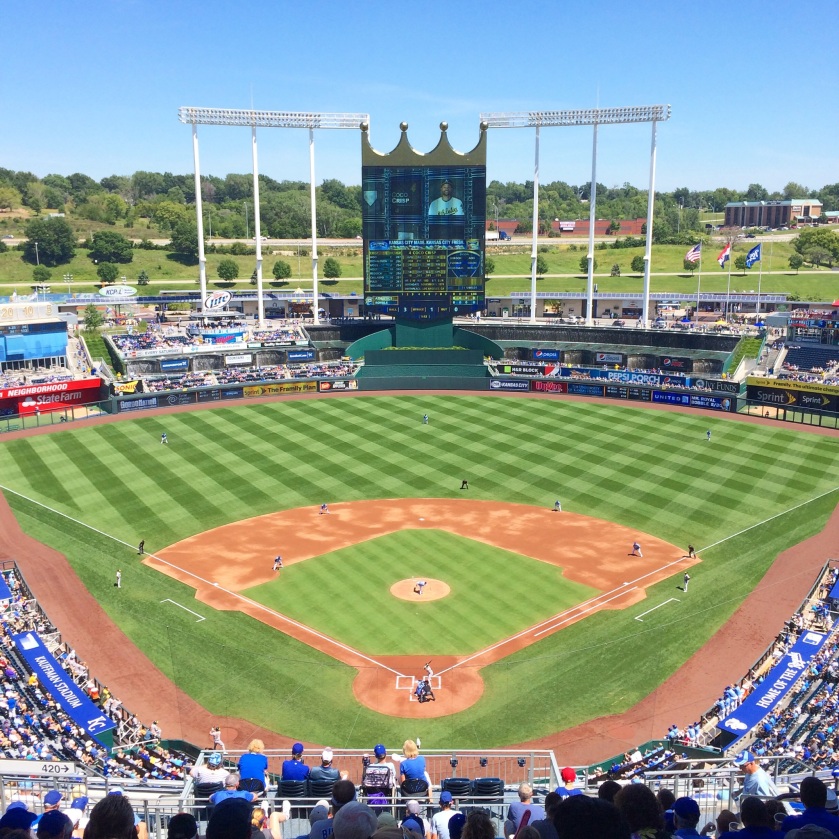 For 8 innings, the Royals could do absolutely nothing agains Ricky Nolasco and the Twins. Three singles through eight innings. The pitiful, underachieving offense seemed back.

Danny Duffy had left the game angrily after 6.2 innings of 4 hit, 1 run baseball, and could be seen shouting into his jersey in the dugout. Another gem spun by Duffman only to get zero run support. Again.

And then, just like that, the game was completely different.

Alcides Escobar, number-two-hitter-extraordinaire, led off with a weak pop fly that fell in for a single. Then Alex Gordon – an actual MVP candidate these days – took a 0-1 slider over the right field fence.

Royals walkoff, 2-1. They remain 1.5 games up on Detroit in the AL Central. Their magic number is 31.

Lots of takeaways from the game last night. Here are a few…

Alex Gordon is an absolute star.

We have a legitimate MVP candidate in left field. Mike Trout is his only competition – and he’ll probably win it still – but it needs to be stated that Kansas City has one of the best in the league playing in front of them day after day.

And I don’t think we even realize it. We are so used to snoozefest warm bodies filling in the lineup I think we miss the reality in front of our eyes. We are so used to seeing Ken Harvey and Neifi Perez and Dee Brown out there that it’s almost hard to notice that there’s a star out in LF.

Number 4 will join 5, 10 and 20 above the Royals Hall of Fame soon enough, and I think last night just woke up this fan base to the reality that Alex Gordon is a star.

Danny Duffy is the Royals ace of the future.

At the beginning of the season, we were all obsessed with Yordano “Ace” Ventura. And I still kinda am. He’s the sexy pick for the future Royals ace.

Last night’s game showed me that while Yordano Days are going to be just as exciting in the future, the true #1 on this team is eventually going to be Danny Duffy.

Duffy’s year has reminded me a lot of Zack Greinke’s 2009 Cy Young campaign. Gem after gem after gem, and absolutely no run support from the offense. They’re similar guys too. Emotional guys. Both stepped away from the game for a time. They even kinda look alike.

We’ve spent a lot of this season worrying about how we’ll ever manage to survive after James Shields is gone this winter. With Duffy, we’ll be just fine.

Escobar might have made the new best play of the season. Ball in the hole. He picked it to his right, leapt in the air and threw hard across his body to first.

And Billy “suddenly playing both sides of baseball well” Butler made the pick look easy at first. Billy also had a great grab on a pop up in foul territory up against the stands. He made the catch, and then tripped and rolled over a sliding Christian Colon. Great play, albeit kinda awkward still.

Growing up, I was always a defense-first player. I was a pitcher and a shortstop and had zero power. I’ve never hit a homerun in my life, but I’ve thrown a lot of strikeouts and fielded a lot of grounders and turned a bunch of double plays. Those are what get me excited because I know what it feels like.

So to see this team field the best defense in the AL for the second consecutive year is a dream. I love it, and it remained insanely awesome last night.

How did he do that?! If you haven’t heard his call after Gordon’s walkoff jack, here’s the link: http://ow.ly/ALdXo.

“If this is your year – and a lot of signs for the Royals point in that direction – then these are the games that you win.”

Sure enough, right on queue, Gordon does his thing and makes Denny look like Nostradamus.

It’s like he has Marty McFly’s Sports Almanac from Back to the Future II. It’s sometimes like he knows what’s going to happen. If Denny picks the Cubs to win the a World Series next year, then something is up.

I truly love listening to Denny Matthews talk about baseball. He’s a genius. Few people know more about the game than Denny does. He has brilliant insights, and I’m amazed by his intelligence.

This is maybe a stretch trying to make the BTTF connection, but as brilliant as Denny Matthews is, his calls are exceptionally boring.

Denny’s call on Gordon’s homerun was as bland as they come.

I mean, c’mon, Denny. One of the most exciting moments in the last 28 years of Royals history. Arguably the biggest moment since 1985. Yet somehow he acts like it was the most pedestrian event ever. Zero emotion. No passion. Completely straight faced and flat.

This has always bugged me about Denny. He doesn’t get me to feel anything at all. Toss in some drama, please! I get that he’s a no-flares announcer, but I want to be able connect with his call as a fan – not a know-it-all emotionless robot.

Finally, some thoughts about Ned Yost’s post game comments about the fans.

Woke up this morning excited to read the local headlines and national articles on the Royals’ night, but was so disappointed when I saw Ned’s postgame comments about the fans.

The media has painted Yost as “ripping” and “dumping on” the fans. He wished there were more people there to celebrate with the team. He talked about how he thought there would be more people. It was packed Monday against the Yankees, and he remembers how it was in Atlanta in 1991 when they were in a pennant race. He thought it would be bigger.

I have no issue with his plea to the fans to get out to The K. He just wants to share in the fun.

But you can’t compare our fans to other franchises’. It’s not fair and we take it personally.

The Royals have done the fans no favors over the past 28 years. We are a wounded group, and we have every right to take it personally when you talk even remotely bad about us.

Yet this is the same team that had “Let’s go, Royals!” chants going in Colorado and Texas last week! It hurts to hear that we aren’t the best fans.

But at the end of it, we are simply a fan base that doesn’t know what to do with first place baseball in August. We have plans on weeknights. We have lives. We have normally moved on to the Chiefs and the new school year by now. We don’t naturally program Royals Baseball into our lives at this point of the year.

So I guess my two thoughts about Ned’s comments are…First, we take it personally when we’re compared to other fans. Second, it’s because we’ve spent the last 28 years living in a miserable narrative.

All that to say, these are exciting times. If we maintain first place, the attendance will slowly creep up. This Labor Day weekend will be huge. Games against Detroit will sell out. And the closer we get to the postseason, the more people will show up. But a Tuesday night against the Twins isn’t going to change how we’ve grown to experience this team.

Last night was incredible. And it’s only late August. Things are only going to get more exciting. It’s amazing to think that the best is yet to come. For the first time in my life, Royals Baseball is back in KC, and I’m still learning how to orient myself to this new lifestyle.