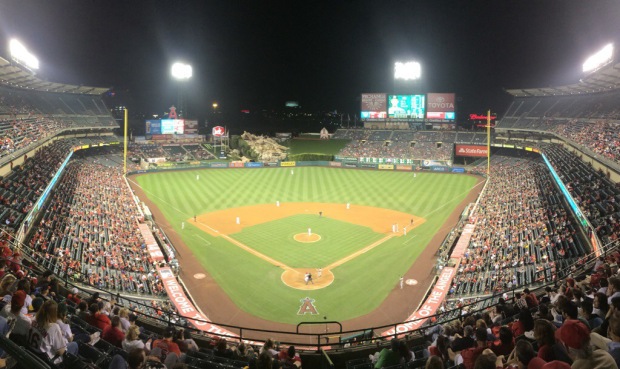 I know what you’re thinking. “Adam, where’s Game 13? Did you make a counting mistake? Or did you skip it because yesterday was Friday the Thirteenth and it’s unlucky?” Neither, actually. Coors Field happened back on June 3. I took the high school youth group I lead. I’m just not quite ready to report on it yet. Stay tuned.

SNL’s The Californians skits take on a new level of hilarity when you have to drive from UCLA to Angel Stadium in rush hour traffic.

But let me tell you this: I was born for driving in the big city. LA traffic requires the perfect balance of aggression and patience, and – I don’t mean to brag – but I have been gifted with that perfect balance. Is it a superhero trait? No one can be sure. But, yes. It is.

During those years, the Angels have earned only one World Series championship: 2002. Led by David Eckstein, Darin Erstad and Garrett Anderson, the Halos bested the Giants in 7 games. But there are other big moments at the Big A.

My personal favorite: the 1989 All Star Game when Bo Jackson and Wade Boggs led off with back to back solo shots in the bottom of the first inning. Former president Ronald Reagan was being interviewed in the broadcast booth when Bo’s jack happened. They were hardly paying attention when Reagan Bo interrupted the interview. A flabbergasted Reagan commented, “OH!” while Vin Scully exclaimed, “And Bo Jackson says hello!”

Jackson won the All Star MVP that year and former Angel Nolan Ryan, then with the Rangers, got the win in relief – the oldest pitcher to ever get a ASG win at the age of 42.

Today’s Angels team is packed with star power: Albert Pujols, Josh Hamilton, and Mike Trout make up one of the scariest 2-3-4 lineups in the league.

Albert cleared 500 career HRs a few weeks ago. His contract coming over from St. Louis was massive, and until this year, it hasn’t looked like it was a smart move on LAA’s part. Hamilton is a similar story, coming from the Rangers.

Mike Trout, however, is something totally different. He’s one of the best in the game right now – a 5-tool player: power, average, speed, arm and defense – and he’s only 22 years old. Even better, he’s a hard worker and is always striving to get better. He seems above the distractions that come with game and success, which is rare for a player who experiences so much success at his age.

Speaking of distractions, I don’t remember a game where I struggled to focus on the action so much. Maybe it was a product of the LA traffic, or because I couldn’t take my eyes off the wide array of stadium snacks that kept passing under my nose.

I was sitting in the front row of section 515. Highest level, but it still felt remarkably close to the game for the cheap seats. Sitting in the front row meant there was a walkway right in front of me, so I got a crash course in stadium eats as the game progressed. The best item in the park in my opinion: the “Big Daddy Nachos.” Chips, beef, beans, red fresnos, pico de gallo, guacamole and sour cream all in an Angels helmet. Way good.

But the distractions kept mounting. I couldn’t focus in on the action for some reason.

The game started strong. In the first two innings both teams robbed a homerun – Trout took one away in the 1st, and Coco Crisp did the same in the 2nd. It was a 1-1 game for a long time, and about the time the bullpens came out the game really slowed to a halt.

Now, I love the slow pace of baseball. It allows space for conversation between pitches and innings. The lack of action actually promotes relationships in the stands. But this game was sort of a drag.

So I went for the distractions.

I missed the entire 5th inning in line for a nacho helmet. I spent the bulk of the 6th trying to catch up on the plays I missed in the 5th. The 8th was lost trying to figure out how to get back to the hotel. And then when the A’s started piling up insurance runs late, I did something I hadn’t done yet on my ballpark tour…

Just typing that feels wrong. But considering the morale of the game combined with the long drive back to our hotel, it was the right thing to do. The Rally Monkey was fun and tempting – and I still wonder if I had cheered louder if he would have come – but it was a sad situation in Anaheim.

I was also a little disappointed I hadn’t gone to the Tuesday night game instead where the Halos won on a Cowgill walkoff HR in the 14th inning.

As I was driving home in the carpool lane on the 405, I started thinking about how distracted I was. I came and went and I hadn’t been looking for anything spiritual. God was there, but I missed him.

The distractions got in the way.

As I exited off the 405 on to Sunset Blvd, I realized how common that is for me. How often am I so caught up in the day to day events of life that I forget to look for God’s action around me? When does my to-do list function like blinders to the places of wonder, beauty or injustice in the world?

God is active. Am I tuned into his action enough to take notice?

There’s a difference between seeing and noticing. I watched the game. I saw it with my own eyes. I was there. But did I really notice what was happening in the game? I think it was Cespedes who got robbed by Trout, but I’m not certain without looking at my scorecard. I was pretty sure it was Moss who hit the 3-run homer, but I had to look that up too.* I saw, but did I really take notice of the details of the game?

Is God doing something cool in our midst? Do we notice it? Or do we merely see it and move on?

The high point in the game was the first two innings when Crisp and Trout robbed the homers.

Tommy Milone got the W for Oakland. Both Milone and Jered Weaver had solid starts, both giving up 1 through the first 5 innings. But Weaver faced Cespedes/Moss/Lowrie/Vogt to start the 6th and went 2B/1B/Sac 8/HR which ended his night at 5.1 IP, 6 H, 4 R, all earned.

The Rally Monkey came out for the Angels in the late innings, but it only helped the visitors who added to their lead in the 9th and sparking my early exit.

The A’s won it 7-1. There’s a reason they’re running away with the AL West: it’s because they’re really good. Not sure why I decided to overlook them when I made my preseason predictions back in March. The Angels are still a contender, but not for the division.

One disappointing note: Pujols got thrown out at third trying to leg out a triple. It was the second game in a row that Cespedes recorded a put out from LF. Pujols looked like he was running in Jello.

Fourteen games down. Sixteen to go.

Up Next: New York Mets.